Born 1936 in Stolp, Pomerania, lives in Wuppertal and Berlin

“Members of the SS respect all living things, even small beetles and animals, by protecting them from being senselessly trodden upon. Like a Buddhist, every member of the SS should affix little bells to his boots in order to warn the animals: Here we come; please step aside so that nothing unfortunate may transpire!”

What sounds shocking from the lips of Bazon Brock is based on the words of Heinrich Himmler. Paradoxically, the Reichsführer of the SS and one of the main people responsible for the Holocaust was very interested in the occult and Eastern religions.

At his lecture Lustmarsch durch das Theoriegelände (2006), Bazon Brock presented a pair of real SS boots with bells as one of several burial objects that, along with other objects such as furniture, gravestones and a painting by Neo Rauch, offered a summary of his life and teaching.

Today a professor emeritus for aesthetics and cultural mediation, Brock began his career between art and theory in the 1960s with happenings organized as part of the Fluxus movement. His career has lost none of its oddity, as today’s happenings by the now 70-year-old show. His aim was never to provoke, however, but to provide an enlightening look at art. There is no dispute that Brock’s appearances, despite their irony, counterfactuality and occasional polemics, are based on extensive knowledge.

This “artist without works” creatively activates the recipient’s mental activity in order to facilitate (without being a know-it-all) a kind of aesthetic understanding of culture and cultural history. In his youth, the fact that Brock required a lot of words to articulate his demands earned him the nickname Bazon (Greek for chatterer), which he has kept, with humorous self-criticism. To summarize Brock’s view of the meaning of art, the artist and scientist both generate their claim to truth by themselves, and present their convictions without being able to reward or punish people. As a result, so Brock, art and science are the fundamental expressions of modernity, whose defining feature is not collectivity, but authority via authorship. This notion finds full expression in Brock’s activities. Next to his artistic happenings, theoretical writings, TV productions, radio plays, and an extensive online presence, Brock is also engaged in artistic and general education through his visitor’s schools at the documenta and their further development via projects such as The Professionalized Citizen in Karlsruhe and the Thinkery in Berlin. 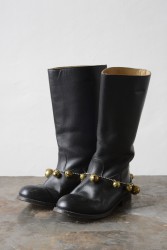 Proof of the spiritual purity of the Brothers of the SS-Order: Anyone who wears bells on his boots to warn even small animals of impending danger can hardly commit murder, let alone mass murder.