Fashion is the world of this artist. Perhaps such an ambivalent relationship of a modern individual to society has never been expressed so clearly. Whoever is involved in fashion wants to separate themselves from the crowd and to be an individual. However, succumbing to fashion trends puts this individuality at risk. The right to individual expression and the willingness to conform to certain expectations leads to an irresolvable conflict. Fashion can be an individual expression, the same as any attempt to disguise one’s inability to express their own opinion. “Why are individuals rarely capable of creating their own view of the world?” This is a question that has always interested Buetti.

In 1994, during a trip to New York, a city where advertising is everywhere, Buetti began to attack the notion of perfection in advertising, which negates all attempts at individuality. With a pen, he draws over glossy photographs from fashion magazines. The cult of youth, beauty, and perfection provokes him to carry out a destructive act. After altering the photographs, the models do not look perfect or healthy. He later turns the photographs over and draws tattoos of the brand names in pen on their reverse on the body of the models and sometimes on their faces. He then takes another photograph. As a result, the tattooed area appears almost like scars that look ominous or sometimes even disgusting. When in 2006 he engraves JVC on the exposed left shoulder of a thin model, everything is immediately different: her slender posture changes into an emaciated, gaunt look, her provocative gaze into desperation, and her short fashionable hair style into a prisoner’s haircut. Regardless of whether it is Prada or Yamaha, as soon as these labels appear as scars on the otherwise young looking skin, instead of the perfection and sheen normally associated with these brands, we get the feeling of frailty, vulnerability and imperfection—thus the reality of one’s own human body.

Buetti carves fashion symbols into the skin of the human body, and thus they become a conveyer of information. In this way, the human body, the source of our most intimate experiences, changes into a public item that is exposed and vulnerable at any time to anyone. Without any inhibitions, one of which in the past was the taboo of nudity, these bodies are left to the scrutiny of the public eye. Bodies, former sources of feelings and ideas, become empty receptacles of advertising—as is often the case with fashion. 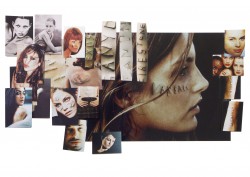 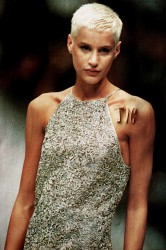