Werner Büttner likes to provoke, not only with his paintings, but also by founding activist groups, and mainly with words. Whether we consider his erotic scenes of personified animals, leather SS officer boots, or his startling assertions, his aim is always to make waves in the stagnant waters of public opinion. Together with brothers Albert and Markus Oehlen and Martin Kippenberg, Büttner belongs to the generation of artists who announced not only a return to painting at the end of the 1970s, but also a change in the approach to societal issues. Disillusioned with the development of society, which was clearly not leading to a better tomorrow as envisioned by modern utopian thought, these artists began to sarcastically redefine former ideals. “Even I want a warm place where I could just shoot at people in the name of good.” Such were Büttner’s shocking commentaries in response to the empty words of the politically engaged generation of 1968.

When, in 1979, Büttner painted a wall mural for the Hamburg bookshop Welt and later was sued for pornography, he founded the “League against Contradictory Behaviour”; and when Georg Herold came from East Germany to the West, he founded with him and Albert Oehlen in 1980 the “Sperm Bank for Refugees from East Germany”—steps parodying the tendency of German society to found various groups to reach sometimes absurd aims.

Büttner a representative of the new wave of painters that emerged at the beginning of the 1980s. Along with Kippenberg, the Oehlen brothers, and Herold, they attempted to establish a “politically motivated realism”, understood as a western response to the state-promoted realism in East Germany. Büttner’s paintings are unruly, influenced by German pre-war expressionism, with energetic strokes of the brush leaving coarse traces. The flagrant colours do not lose face with the clamouring motifs. His paintings and collages seem to be illustrations of anecdotes and puns from German petit-bourgeois pub vernacular, deformed by war and Nazism. The titles play a decisive role in the reception of Büttner’s pictures, as in the abstract painting “Russian Revolution—as recounted and in oil”, which can change, depending on the viewer’s relationship to the Russian Revolution, for instance into a countryside destroyed by fire. Hence, it is not possible to view this provocateur’s paintings separately from their titles or from his sarcastic actions—which all societies need from time to time. 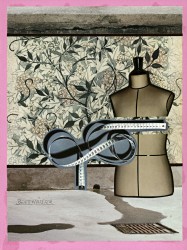 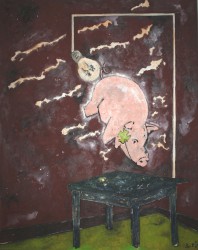 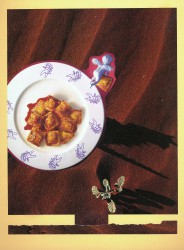 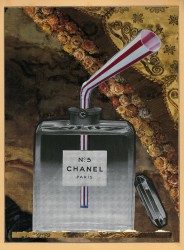