In the 1980s, he painted fiercely and founded the art group Tvrdohlaví (Hardheads). In 2002, he photographed crying politicians and installed a flashing red neon heart above Prague castle. Since then, he has painted abstract pictures, photographed himself nude on a New Year’s greeting card, erected a twisting statue, Revolution, made from more than 80,000 keys, continued to paint, stirred up trouble with his articles and declarations in the media, and in 2009 made a beautiful film about abandoned machines in a Koh-i-noor factory. Jiří David has done all of this. He belongs to the generation of artists whose ambivalence, inconsistency and disrespect for any kind of continuity, tendency towards provocation and sexually tinged scandals, theatricality, media involvement, and also fascination with painting are reactions to the turning points in the social, political and cultural developments of the past decades.

All the conflicts and paradoxes of the present; the collapse of modern notions of progress accompanied by the clash of various cultures and ethnic groups, escalated by the Internet; violence motivated by medieval fundamentalism and the use of the latest scientific technology have given this generation the freedom of a “court jester” plunging into the depths of antagonism and insanity. While occasionally coming up for air, these explorers bring to the surface a reality that most people would rather forget.

One of these enterprises is David’s series of photographs My Hostages from 1998, in which he photographed his own two children as prisoners. They have their hands and feet tied and are sitting on chairs in costumes, surrounded by children’s props. At first sight, it is clear what he is trying to show: not only a social taboo, which is the sexual abuse of children, but also the media’s common images of hostages, how Islamic terrorists present them to the world. Undoubtedly, this is flagrant provocation that arouses abomination and disgust, but also fascination. We cannot get these images out of our mind. Slavoj Žižek, a philosopher from Ljubljana, sees this contradictory relationship to artworks and to the world in general as typical of postmodernism: “We enter postmodernism when our relationship to things becomes antagonistic. We, in a way, give in to these things. They disgust us, but at the same time, we are attracted to them.” And this is precisely what is going on in the work of Jiří David, an artist of many faces. 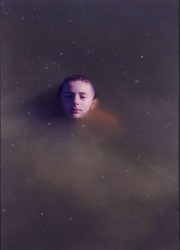 From the cycle “Daniel” 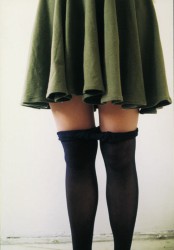 From the cycle “Zdena” – Green skirt 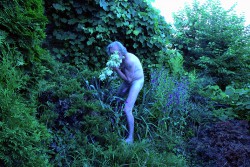