Born 1958 in Saarbrücken, Germany, lives in Munich and Beijing

As an invention of the nineteenth century, i.e. a period during which the naive positivistic-materialistic outlook on the world was considered progressive, photography was automatically assigned a documentary role. It was to become the mirror of the tangible form of reality. Even today, photography is generally associated with documenting reality.

Roland Fischer is a photographer who, as he says himself, is not interested at all in the documentary nature of photography. But what is a photograph to him if it isn’t a document? Fischer photographs in series. Perhaps the most known of his series is Mönche und Nonnen (Monks and Nuns) created between 1983 and 1987 in 50 French monasteries. The faces of the nuns and monks, taking up the entire surface of the photographs, are captured close up, their eyes focused directly on the lens. Their features are sharp, and the background of the photos is neutral. This is how photographs are made for passports or official documents. And yet, the shots are unusual, striking, in some ways provocative.

Another series by Fischer, Cathedrals, focuses mainly on the exteriors and interior of Gothic cathedrals, always so that their architectural form takes up the entire surface of the photographs. They are transformed into abstract images that are instilled with their peculiar sacred character. A similar effect is created by many of his photographs dealing with Arab ornamental architecture, typical of the Alhambra in Spain. Another series is entitled Chinese Pool Portraits, photographs of girls standing up to their shoulders in water. The contours of their faces, sometimes captured in profile, sharply stand out as if carved from the water that surrounds them. Similar to the portraits of nuns and monks, these images of Chinese girls have a peculiar character. They are not photographs as we know them from the glossy pages of magazines. And finally, Fischer’s series Facades features geometric and colourfully structured facades of buildings, mostly from Asia, that change with the artist’s lens into abstract surfaces similar to images of modern abstract paintings. Indeed, images. And this is precisely what it is about. Fischer’s photographs are images that do not relate to something outside—which is the assumption of documentation—but that have their own life. Fischer explains that, with monks and nuns, he is trying to show the same idea as with the facades: an image that juxtaposes the tangible with thought and image, and that is more than a document. 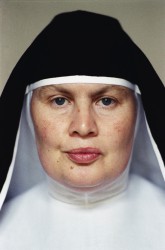 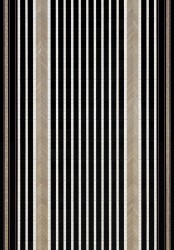 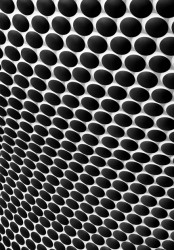 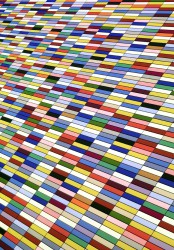 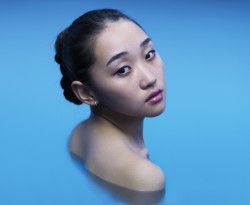 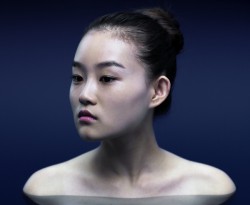 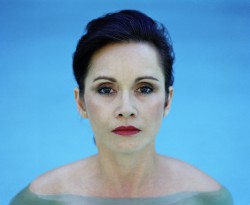