No other artist today devotes as much passion to the modern tradition. But what exactly is the modern tradition? In architecture, it is the principle that form is governed by function. In the 1920s, the German Bauhaus school was driven by this particular principle, and after World War II, the Functionalist approach dominated European architecture. We all know the result: sterile suburbs made of concrete blocks. Later in the 1980s, at a time when modern architecture became a target for criticism due to this sterility, Günther Förg began to photograph the functionalist structures dating from the inter-war period in Moscow, Rome, Tel Aviv, and Frankfurt.

In these large, mostly black-and-white photos, Förg focuses his attention on rational segmentation, the sophisticated elegance of the structure of buildings, and the geometric character of windows and balconies. With the help of aerial perspectives and adventurous views from below, distorting the perspective and therefore highlighting the rhythm of the structure, he created photographs that often resemble geometric abstraction. Förg is indebted to the Russian artist Alexander Rodchenko, who introduced this method into photography in the 1920s. The buildings that this German archaeologist of Functionalism photographed include not only villas of progressive architects such as the Tugendhat villa in Brno or Wittgenstein in Vienna, but also Città Universitaria in Rome and the IG-Farben building in Frankfurt, two structures that were erected during fascist regimes. This is a paradox: although Functionalist architecture originated in the progressive socialist utopias, it also served the ideologies of communist and fascist regimes. And it is this “promiscuity” of modern forms that interests Förg.

In the 1990s, Förg started painting—understandably abstract. After all, abstract painting was considered for many years to be the only possible expression of modern art. Today, however, there is a certain level of skepticism towards abstract art. The memory of this art form and its lapse into the realm of décor is still alive and well. Despite this—or perhaps because of this—Förg has tried to bring this art back to life. His pictures—large colourful surfaces that seem to carry on a dialogue with the great American abstract artist, Barnett Newman, multicoloured splotches quickly applied with a brush, or grids taking up the whole surface of the picture—are proof that abstract art is still far from being dead. 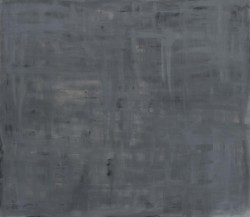 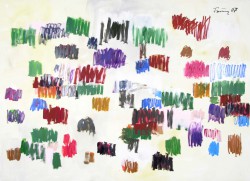