“…because we know when we add up all those inches, that’s gonna make the fucking difference between winning and losing! Between living and dying!”

Thus sounds an old, broken voice with the usual American pathos in Thomas Galler’s video work Inches. We see young soldiers at the end of a mission—deep in thought, remembering the horror they have just experienced. But the speech was not meant for them. It does not belong to the war drama The Thin Red Line (1998), from which the images were taken, but from Any Given Sunday (1999), a movie about the American dream of football–a fact which the viewer learns only at the end of the five-minute video. The experience of this undisturbed convergence of two cinematic elements may lead to a reevaluation of the meaning of sports and war as presented in American movies. Meditations upon Galler’s Inches (2005) may culminate in two insights: sports make use of an exaggerated military rhetoric. And: ways of speaking such as this can end up trivializing or blinding our view of real military conflicts. But Galler does not work with didactic hammer blows. Differently conditioned viewers may be taken with the speech’s emotional charge and may not immediately find the combination of sports and war objectionable. But the viewer who takes into account the work’s constitution and the artist’s approach will hardly miss the critical reflection. The “assemblages” of visual material are preceded by the artist’s intense search on the particular theme. The series Weapons Collections (2002–2008) consists of images from numerous newspapers and magazines showing weapons in a diverse range of contexts. Documentary and reportage photographs, artistic images, drawings and movie stills are presented in a loose and standardized combination.

By exploring the media’s depiction of the world and its consolidation, Galler’s works make clear the meaning of staging. The truth that the various media depict is also one that they shape. The media influence what things we associate with a particular message. The battle for the interpretation of events is decided not least in the media—the power of images is unbroken. Galler holds a mirror up to this state of our world of perception. 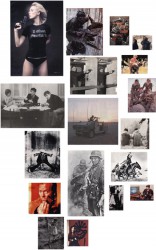 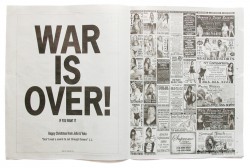