Andrew Gilbert’s obsession is nineteenth century European colonialism. His drawings, sculptures, and installations display uniforms, arms, African fetishes, tribal chiefs, goddesses, and also marching or fighting soldiers. But all of these uniforms and arms are in the end only external décor that conceals one of the most tragic dramas of world history: colonialization—a quest, rooted in the European notion of superiority, to conquer and rule non-European nations and violently instil European cultural values throughout the world.

Gilbert goes so far with his obsession that he himself pretends to be a real general of the British army, Andrew Gilbert Wauchope, and he even writes fictive letters using his name, or is reincarnated as the Zulu queen—queen of the African nation against which the British led a bloody war. And indeed this is violence and supremacy, and especially sexual and racist projections as the origin of this violence. Hence, we not only see murder and rape on Gilbert’s drawings, but also the most absurd sexual fantasies where all thinkable boundaries are crossed, including those between humans and animals. The drawing The Birth of Andrew Emperor of Africa from 2010 shows a sitting African woman with iron shackles around her neck and wrists, a penis protruding from her skull-like head, and a British soldier with a pistol and sword in his hands coming out of her vulva. And yet these horrible scenes give the effect of seductive beauty, especially due to the colours. Even the original notion of the cultural benefit of Western civilization was seductive. However this soon changed into sheer terror.

Gilbert has in this respect not only unveiled the terrors of colonialism and the associated sexual and racial fantasies, but he also points out the fact that even European culture, which considered itself superior, was, and still is, steeped in primitive superstitions, fetishism, aggression, and sexual obsession. Despite all the perversity and terror, Gilbert’s heroes, especially his life-size straw figures dressed in real, though time-worn uniforms, appear comical and harmless. Their era is gone forever. Only certain exotic memories remain, and an effort to somehow deal with this age in history. Even the famous African explorer from Prague, Emil Holub, belongs to these exotic memories, for he too is a part of this seductively horrible colonial cabinet of curiosities. 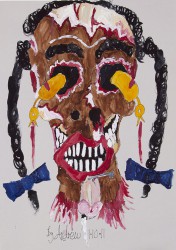 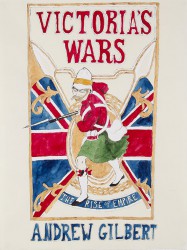 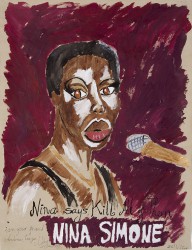 Nina Says Kill All of Them (Nina Simone)