Born 1972 in Sydney, Australia, lives in Sydney and London

Art is in the eye of the beholder. When, as in Self-Portrait Spinning (Paris) from 2002–2013, Shaun Gladwell spins around on his skateboard in front of tourist sights such as the Louvre or the Bastille, he has the city’s postcard motifs in mind, but the speed of his motion causes the usual all-encompassing panoramic view to be replaced by a kind of blindness. By contrast, the view from the outside moves into focus. As a self-portrait, the video is built on the artist spinning in circles and on the viewer’s accentuated gaze at the artist. The movement is in slow motion, while the city moves at its normal pace. Gladwell articulates the various viewers’ levels of perception in their diverse realms of experience. The artist—who exists in a realm of motion separate from the surrounding reality—cannot grasp them; the recipient outside of the artist’s realm of experience, however, sees them clearly, although the artist’s point of view remains hidden, comprehensible only vicariously by watching the body in motion. The boundary between image and viewer is renegotiated through shifts in and combinations of ways of seeing within and outside of the medium. The homonymous photographs reveal contrafactual aspects of the artist’s self-portrait. Because of the need to remain still, artists who paint self-portraits of themselves depict themselves merely as people holding a brush. By comparison, Gladwell—whose art is based on movement within space—is constantly in motion while recording his self-portrait. His image may be blurry, but the speed thus signaled suits him perfectly as an artist of motion. The Australian-born artist is fascinated by the idea of comprehending space through his own motion. He views his works as traces of an experience, a form of direct engagement. “I’m interested in how bodies move through space and the capacity of bodies to perform in certain situations.” With his series Sleeping Soldiers (Afghanistan, 2009), Gladwell created a work that circles around experience and perception. “The works were inspired by several historical paintings where the subject is sleeping—which for me is an enigma—to be able to observe the subject but to never know what they might be seeing in dreams.” Here, too, we encounter the theme of an unrequited gaze and different forms of perception in different realms of experience. The photographs do not reveal whether the soldiers are exhausted or dead. It is all in the eye of the beholder. 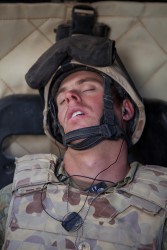 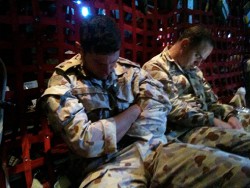 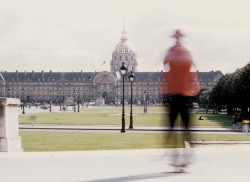