Born 1970 in Mainz, Germany, lives in Cologne and Berlin

Her huge colourful photographs show the serene countryside with plush, green meadows, surrounded by primeval trees, sloping terrain, brooks lined with shrubs, and rolling hills in the background. Amidst this idyllic countryside, there are often people pensively gazing at the beauty of the surrounding nature. This is what nature must have looked like in the promised land of Arcadia, at least this is how it is usually presented to us. The 17th-century French painters Claude Lorrain and Nicolas Poussin and the Romantic landscape painters of the 19th century painted in this manner—and Beate Gütschow sees it in the same light. However, taking a closer look at her photos, one becomes disenchanted. The grass seems to be too green, the trees as if they had artificial bark, and the light that illuminates the tree tops comes from a different angle than the glittering streaks of sunlight on the water surface. And what about the bicycle that one of the observers is leaning against? Something here is just not right.

Indeed, Gütschow’s photos are not what they appear to be: they do not show a realistic countryside. Though they are composed of landscape photos that this artist takes herself of various locations, these photos are then altered on a computer. She groups the photos and clippings into various compositions that consciously mimic romantic notions of the countryside, as we know from European painters. In addition, with a computer, she intensifies the colours, sharpens or dulls the contours and occasionally plays with the light effects. These manipulated photos presented in the series LS – Landschaft (Landscape), confront us with our own notions of nature. Does something like primal nature really exist, or has nature always been just a sophisticated and artificial construct of the world, like we know it from fictional painted images? Can the notion of nature be separated from culture?

And what does our notion of cities look like? In her series S – Stadt (City), Gütschow similarly copes with the modernist fantasies of architects such as Le Corbusier. We see vacant concrete areas, two-level roads, buildings with almost no windows, ramps, and residential skyscrapers, all conveying anonymity and loneliness. This is what this artist’s black-and-white urban world looks like. Perhaps the photos from her series I – Innenraum (Interior) are more hospitable. However, even here our world seems to be determined mainly by the cold functionalism of technical devices. 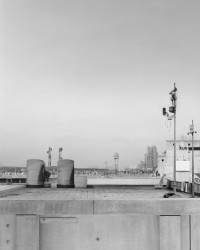 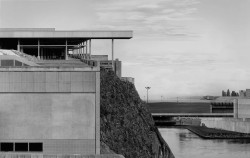