Nobody is really surprised by photos of the human body or landscapes. Nor does anyone ponder about the relationship of images to reality. It is as if the 100-year-old warning of Charles Baudelaire was forgotten: photography creates a false reality. A generation of photographers, especially the Germans August Sander and Hilla and Bernd Becher, believed that their photography was objective. Not Hanzlová. She approaches reality subjectively. During her studies at Folkwangschule in Essen, she regularly visited her birthplace Rokytník to photograph the inhabitants of the village. She then exhibited her photos together with people from an urban environment. Hence, two opposing perspectives are juxtaposed, nature and civilization.

Hanzlová first became known for her series Female—women spontaneously photographed on the streets of European and North American cities. The figures in these photos distinctly stand out against the fuzzy background. The women do not blend into the surroundings, but retain their individuality, which is almost provocative in a society structured by sociological categories. These women do not represent occupations, nationalities, or minority groups, as in the case of Sanders—they only have a first name, nothing more. Hanzlová does not know their age, occupation, or even where they live. She just randomly meets them and asks to take their picture. It happens quickly. They are standing in front of the lens, but still hesitate. To stop and pose for her is not an effortless task. In most cases, it is almost an unfamiliar feeling—the feeling of embarrassment when a person tries to avoid a humiliating situation. There is an old wives’ tale that says a lens focused on a person is a weapon aimed at your dignity. This is why many believed that taking a picture of someone steals the soul from their body.

Indeed the body, because this is what we see in an ordinary photo. It is the outer essence of the body, its substance. In contrast, Hanzlová’s lens permeates deeper, to the endless universe referred to as a human being—and despite all of its frailty and imperfection, it exudes a surprising level of dignity. However, reverence is required to capture this. And the photos of this artist truly display this reverence, whether it be a person, or nature, which she has focused on in recent years. Hanzlová explores an almost forgotten question: What effect does a photograph have on the individuality and dignity? 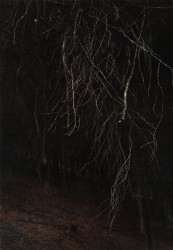 From the series Forest: #45 Blue Hair 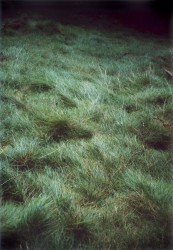 From the series Forest: #44 Small Place