There is one thing that makes Thomas Helbig unique: whether it is sculptures, drawings or paintings, all of his works have a special presence in the past. What does this mean? Perhaps it is easiest to explain with his 2008 sculpture Engelchen (Angel). On a four-sided white landing made of concrete, i.e. modern material, there is a curious bronze fragment of an antique sculpture. Or is it a metal turbine broken off of some industrial machine? It is difficult to decide. On top of this configuration, whether antique or industrial, clearly identifiable wings are poised. Almost automatically after looking at this sculpture, the winged goddess of victory Nike comes to mind, triumphantly welcoming visitors to the Louvre in Paris with her outstretched wings. However, this goddess appears to have gone through the 1945 bombardment of Dresden, which to this day is still one of the most horrific memories for Germany. Parts of the sculpture and the landing itself are melted and damaged in various ways. There is not the slightest indication here of victory, triumph, or fame. And this is precisely where the force of Helbig’s works lies: they embody the past in such a way that, instead of nostalgic memories of the past, we are forced to think about the present.

This deconstructive process of bringing the present into past myths can be seen even more clearly in his paintings. Helbig often uses abstract geometric forms. Yet, instead of these forms imparting rigidity, rationality, decisiveness, and a clear view of the future, as was the case with classical, geometrically abstract modern paintings, Helbig’s forms convey a feeling of vagueness, indecisiveness, hesitation, and mystery. But not only that. He often crosses the line into narrative, which for modern painting was a crime. Forms should maintain purity, and in turn, resist any associative notion of a theme. But not the forms in Helbig’s pictures. On a black background, a white square is seen, and the upper corner seems to be torn off. The legendary square by the Russian artist Kazimir Malevich is present in the torn image. With a coarse stroke of the brush, two painted ovals appear on the white surface, and moving between them, a pendulum with a sphere at one end. This work from 2009 is entitled Blüte (Blossom). Thus, Helbig integrates foreign elements into the classical modern reference that evoke mystery. In a manneristic way, he brings the past into the present and the present into the shadows of the past. 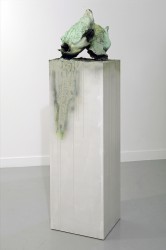 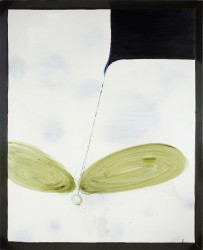 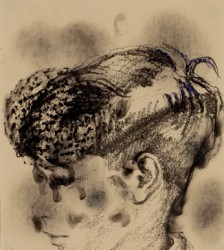