When Georg Herold, still a student in 1977, leaned a wooden slat against a wall, it was a decisive step towards his future. Slats have become literally the backbone of his art to this day. He makes picture frames from them and then hangs them on the wall without a canvas. Slats are used as a frame for sculptures sewn from canvas, and other times, as a medium for writing profound philosophical maxims as well as humorous notes. For example, the name “Goethe” glimmers on an infinitely long slat. A short broken slat cowers next to this with the description: “a loser in comparison”. And however ridiculous or unbearably banal this comparison may seem, it clearly demonstrates the essence of this artist: a revolt against all pretentious goals of art. Herold—something like a court jester—ruthlessly resists the notion still prevalent from the 19th century that art is something above everyday life. Thus, the aim of this artist is not high art, but the everyday experience in all of its grotesqueness, almost Kafkaesque absurdity, banality that defies any attempt to rise above.

Besides his slat creations, Herold glues bricks to canvases that cause cracks and creases when hung on the wall due to the weight, making the pictures look like crumpled rags. This is always an attempt to reconcile high art with the everyday experience. Of course, this attempt is doomed to fail. However, Herold enjoys making a wreck, and with humour. And his works certainly demonstrate this, despite the often irreconcilable insolence, and yet somehow regrettable and apologetic. After all, we all know the situation in which the only thing left after some misfortune is a tinge of humour.

Since the 1980s, Herold has been painting with Beluga caviar, one of most expensive brands in the world. He applies the caviar eggs to the canvas and covers them with varnish. The result is consciously reminiscent of works by American abstract expressionists, i.e. artists who were the last in the 20th century to believe that it is possible to reach the “sublime”. However, Herold’s caviar galaxy—or rather his mocking of this sublime notion—sometimes involves almost disgusting blotches on the pictures and the passion of counting each individual egg. But then numerical rows are always an expression of detachment. And this is exactly what Herold has in mind. “Detachment is important in art, not sentiment and authenticity,” Herold explains. Detachment is a precondition for critical thinking. 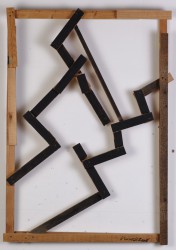 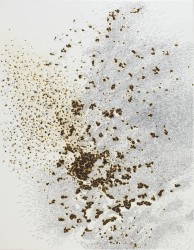