With the appearance in the 1960s of the Japanese photographers Nabuyoshi Araki and Daido Moriyama, who crossed the lines of sexual and societal taboos, it was hard to imagine that someone could go even further. Born in Japan and living in New York, Noritoshi Hirakawa demonstrated that it is indeed possible. However, more than sexuality itself, he is interested in the relationship of private and public space, intimate relationships where we can live sexual fantasies in the privacy of our own bedrooms and public life where sexuality and the desires associated with it are often subject to strict rules and prohibitions. What is acceptable in public and what isn’t? When do random witnesses of a sexual act recoil with disgust, when do they pretend they saw nothing and when do they keep watching with fascination? During an experiment in 1998 entitled Reason of Life, Hirakawa asks young girls to aim cameras under their skirts in public spaces in Tokyo. The result is perspectively distorted views between the legs of girls, a place of rampant fantasy. Who would not want to see more? Hirakawa shows these slightly pornographic shots together with photographs documenting the reaction of random by-passers. In Art in America from 1997, he asks lovers to have sex in public places in front of his camera lens. He then lets audiences decide what feelings they have when looking at the photographs: a feeling of guilt, embarrassment, curiosity, no feeling of shame, or even lustful desire. In fact, Hirakawa provokes people to decide what is acceptable in public and what should remain behind closed doors, so that they can create their own criteria for censorship.

In Japan, Hirakawa drew attention in 2007—years before the nuclear catastrophe in Fukushima—when he started exhibiting photos of picturesque Japanese landscapes under the title In Reminiscence of the Sea—Moonlight, Sunset. An observant person can discover another taboo of Japanese society: the nuclear power plant. Sex can lead to important questions, and on the contrary, important questions often end with sexuality. As Hirakawa explains, “When I show a picture that has a direct relationship to sexual activity, I hope that it gives audiences the possibility to think about things other than sex. On the other hand, when I show ambiguous pictures, I want people to concentrate more on sex.” 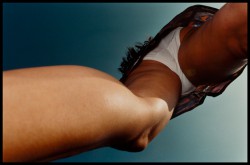