Born in 1957 in Bern, Switzerland, lives in Paris

Thomas Hirschhorn’s installations are overwhelming. He assembles chaotic installations from cheap materials for packing merchandise ordered over the internet—boxes, wrapping paper, cardboard, cellophane, wooden strips and moulding—and from consumer waste, especially bottles of all kinds, broken television sets and plastic chairs, which are spread throughout the space like a cancerous tumour. At first glance, the rather absurd configuration is composed of various clippings from newspapers and magazines glued, pasted and affixed onto these structures. Taking a closer look, one is suddenly overwhelmed with disgust, as the photographs of dead, tortured and disfigured bodies from these clippings and photos are often unbearable. And so he turns playful and absurd mazes that might be the work of an obsessed handyman into caves of horror.

Hirschhorn thinks of himself as an artist who makes political art. “I want to do active art, art that activates the brain.” This is not an easy task in today’s mass-media world. This is why this artist / politician draws attention to himself with the help of scandals. In 2004, he installed Swiss-Swiss-Democracy at the Swiss cultural centre in Paris, a maze showing horrible torture scenes from the war in Iraq, which were made into a collage with the coats of arms of the Swiss cantons. The cultural foundation Pro Helvetia immediately reacted by cancelling the exhibit’s already promised financial support.

Another of Hirschhorn’s fundamental endeavours is to address not only exhibition audiences with his installations but also members of the public who do not normally visit exhibits. His street altars (Strassenaltäre) are famous in this respect. They have so far been dedicated to the artists Piet Mondrian and Otto Freundlich and to the American writer Raymond Carver.

Hirschhorn makes conscious use of the horrible scenes that have by now become a characteristic trait for this activator of the human conscience. Through them, he aims to express the “hard core of reality” and to activate the viewer. This was also his intention at the 54th Venice Biennale in 2010, where he represented Switzerland. His installation was entitled Crystal of Resistance. Composed mainly of glass and mirrors, it truly appeared to be a collage of glimmering crystal—but only until the viewer noticed the photographs and clippings documenting, as typical for Hirschhorn’s work, the hard and frequently nauseating core of reality. 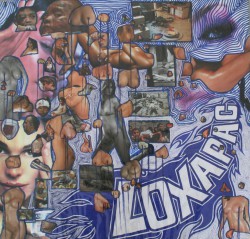 “Loxapac” from the Anxiolytics Series II 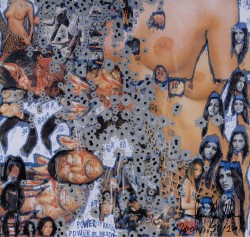