Since the beginning of the 1960s, Alex Katz has been painting people, focusing in particular on portraits. In this respect, he was seen as an artist who was not working within the then recognized trends on the American art scene. Who at that time could still paint human portraits after the expressive abstract paintings of Jackson Pollock and the strict formalistic works of Barnett Newman? Katz is perhaps the only painter doing this, and even he is not really sure if portraits can still be considered “modern art”. Hence, he does not only rely on his own perception and brush, but also uses (though rarely) wide-angle photography as a basis for his paintings. He is also fascinated by film and the possibilities of zooming in on and enlarging random objects or people with the camera lens. Katz thus developed this approach, and as a result, his portraits appear to be in some way contemporary, despite all of the conventional notions associated with it.

The way in which Katz handles lines is striking. His lines are clearly defined. They separate the face from the background. They form the eyes, mouth, and eyebrows, and give faces almost an ancient Egyptian appearance. And indeed at the beginning of his painting career, Katz was influenced by ancient Egyptian portraits, as well as icons. He not only adopted the distinctive force of lines from icons, but also the specific manner of manipulating light—with daylight used in all his photographs. In the past decade, he has used spot lights directly on the subject. The light seems to come from the painted subjects themselves, who transform into somewhat surrealistic beings.

Another peculiar feature is the rigidity of the subjects. This, in fact, is what places Katz’ paintings in opposition to contemporary art. His portraits are mostly painted from the front, rarely in profile. And even though the individuals are in motion, they always appear to be cut off from life. Removed from anything bodily or sensual, they change into surfaces, colour, lines, and light. And yet they are faces and bodies from this world. What this reveals is a certain tender, almost vulnerable beauty. A beauty that was the deliberate aim of this author from the very beginning. A beauty that, despite its origin in the real world, obstructs all vile, everyday, transient certainties. “I do not believe in the existence of truth. I believe in beauty,” Katz explained several years ago. And he has never stopped believing in traditional painting. 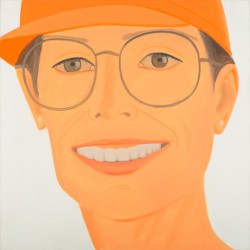