Rosa Loy loves storytelling. Her description of her painting Search (2008) might sound as follows: In the foreground is a girl in front of an art book. In the middle right, her back to the viewer, is a young woman with a portfolio under her arm. In the background left is a picture of a unicorn. The tree in the middle links the three spatial layers and represents a narrative connection. The unicorn is the object of investigation and, because it symbolizes revitalization and immortality, also personifies the knowledge that the women acquire and keep alive by viewing and exploring art.

Rosa Loy’s casein paintings hold meandering stories at the ready. Their many signs and symbols lead the viewer through a magic forest of mythology, philosophy, and kinetics. Not raised religiously, her worldview is more animist. By observing nature, we can discover other contexts and relationships, argues the trained landscape architect. Her early flower paintings show that she has continued this immersion within nature since taking up painting. Later, figures begin to appear in her art—especially women, whom the artist, who grew up in East Germany, depicts as smart and sensual: seductive and self-assured at once. “Only rarely does a man appear in the background. All in all, I find women more interesting. Firstly, because I myself am a woman, and secondly, because woman’s role in the two systems was so different and is constantly changing.” Loy studied at Leipzig’s Academy of Visual Arts, and is considered a representative of the “New Leipzig School”, which gained international fame not the least through the works of her husband, painter Neo Rauch. Their double exhibition Gravitation (Loy) and Abwägung (Rauch) (2012/13) in Chemnitz placed the couple—who work under one roof but in separate rooms—into the spotlight. Loy describes interpersonal relationships (“that is, communicating with one another”) as her dominant theme. With Loy and Rauch, this exchange also takes place via art. Criticism is only offered upon request, but “it is never emotional. We are interested only in the craft, never in content. That is personal—no discussion.” For Loy, painting is an opportunity to express past events without words, to solve problems, and to ask questions. 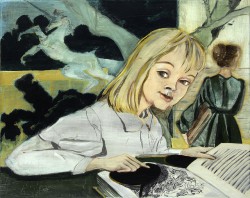