“The name of photography’s noeme will therefore be: ‘That-has-been’ … what I see has been here, in this place.” (Roland Barthes)

Paris, 1979. A young couple photographs itself in a mirror at the Hotel Bohème. A short time later, they learn that the woman is pregnant. This photographic moment becomes an initiatory moment of life and art. Until 2013, Peter Lundström will repeatedly photograph his growing family on reflective surfaces located in public or semi-public spaces: on streets and squares, in trains or hotels. He creates low-angle and high-angle shots, photographs of shop window and images of funhouse mirrors—the kind existing since the 1920s. During that time of the photographic avant-garde, the artist Werner Gräff called on people to “no longer be afraid of reflections in photographs. Are there not enough examples in which reflections offer a special charm?” Gazing into the reflective surface, Lundström and his wife, the artist Anna Kristensen, look out of the picture at the viewer. The dividing and connecting line between the couple finds its correspondence between the couple and us, the recipient. Through the transparent border of the photograph, the viewer looks into a mirror that reflects not his gaze, but that of a stranger. A Lacanian horizon is thus opened for the people in the picture and for those outside it. The couple’s dual gaze onto itself strengthens the awareness of togetherness. With the encounter and differentiation of one’s own gaze with that of a stranger, commonalities and differences become clear to the viewer as well. Not only do the photographs allow us to follow the couple on their travels to various countries, but they also take us on a journey through time. The motionless faces grow older; the daughters grow taller. Roland Barthes described the photograph as “an image which produces death while trying to preserve life.” In his nearly 30-year series, Lundström exponentially reveals this aspect of photography. By “keeping his eyes focused firmly” on life, he inexorably evokes the fleeting nature of the moment and the end of all being. 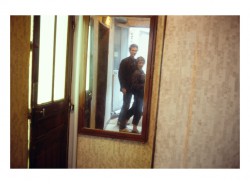 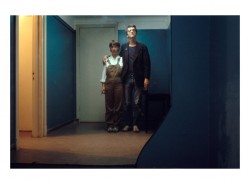 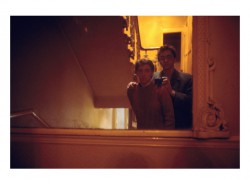 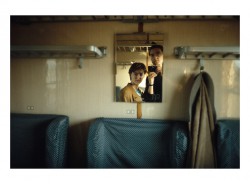 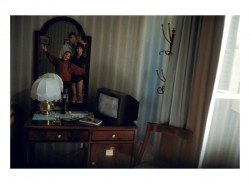 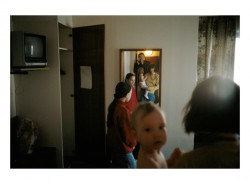