In one interview, Goshka Macuga characterizes her work as “a reaction to all the changes that I experienced in Poland at the end of the 1980s”. As a reaction to the deceiving communist propaganda on the one hand and to her Catholic upbringing on the other. Thanks to her experience with these contradictory ideologies, Macuga has realized that any notion about the existence of one universal truth, whether Catholic, communist, or modernist, is an irretrievable relic.

Since this time, she has tried to break down all the notions of what art should look like using her sculptures, installations, photography, performances, and films—inspired  by the German art historian, Aby Warburg. In 2008, she exhibited wooden sculptures under the title “When was Modernism?” at the Antwerp Museum van Hedendaagse Kunst that resembled ancient cult objects more than contemporary art. However, reality was quite differentit was the work of students from the Visva Bharati University of Fine Arts in Santiniketan, West Bengal, India. And with her perspective that deviated from all notions of contemporary art, she parodied western aesthetic assumptions.

When Macuga was invited in 2010 to London’s Whitechapel, she exhibited a Gobelin tapestry made in 1955 according to Picasso’s famous painting Guernica, otherwise displayed at the UN building in New York City. When the US Secretary of State, Colin Powell, declared war on Iraq in 2003, he was actually standing in front of this replica of the worldrenowned antiwar work. However, he had it covered up with a blue curtain. Macuga presented this replica in Whitechapel together with the curtain under the title The Nature of the Beast in a place where Picasso’s painting had already been seen once. In 1939, it served as publicity for collecting money to support the Republicans during the Spanish civil war. Even this time, it was used more as a backdrop, because a huge conference table was placed in front of it for various meetings during the exhibition. Here again, art was intermingled with propa- ganda and politics.

Macuga had an unforgettable entry at documenta 13, where she presented a hand-woven Afghan rug measuring 5 x 17 metres, showing the dilapidated neoclassicist palace in Kabul. A rug just as large displaying the awards ceremony for the Arnold Bode Prize in Germany was exhibited in Kabul. And as with her previous work, she also placed this event in context with the notion of what contemporary art should look like. 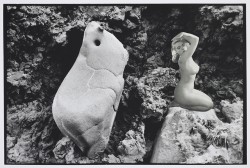 The Lost Art of Seduction