Born 1957 in Zurich, lives and works in Berlin

All collages contain a bit of destruction and rebuilding. Fragments from diverse sources come together to create a new picture. In Rémy Markowitsch’s Kaufmann (Talmud Scholar), the aspect of destruction is clearly visible. The visual surface of the picture is formed by irregular tear marks and tattered paper, but the material surface is homogenous. The entire work is covered by a photographic varnish like the surface of water over a rocky bottom. The photograph is one of twelve images from the portrait series Schadenfreude, all of which are based on an auction catalogue from 1962. However, the works of art depicted in the catalogue are not combined together through the artist’s intervention. Instead, their interpenetration results from their unintentional destruction in the form of a mildew that has eaten its way through the book and thus made portions of various images on different pages visible as one. Thanks to this damage, Markowitsch discovered a fascinating continuity in the art of the catalogue’s main artist, the Austro-Hungarian painter Isidor Kaufmann, who had endeavored to present “the Christian and Jewish worlds as equals”. With the destruction of the catalogue images, his scenes of Jewish life are juxtaposed against and placed on a par with works containing Christian iconography. Through this “accidental collage”, Kaufmann’s original aim finds a modern implementation. Markowitch has chosen images from the catalogue whose fragmentary reproductions create a compositional and thematic tension. He then copies these images, thus preserving their fragile state for all eternity. The enlarged format amplifies the random images’ independent validity and underscores the notion that the aesthetics of destruction can be a worthy object of interest. The images represent the chasm between eras and faiths. The result is a person surrounded and shaped by the conflicts of time, with the power of reunification. We look at him and he looks back. Although the catalogue’s destruction was a chance event, the symbiosis of diverse images precisely reflects the way Markowitsch—an artist whose works are focused on the subjects of cultural appropriation and media depictions—makes art. In his project On Travel (2004), he illuminates and overlays various pages from books in order to explore storehouses and mediators of knowledge. 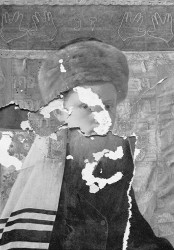 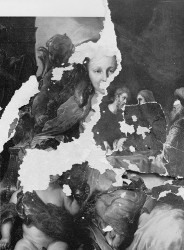