Jonathan Meese is one of the few artists who still manage to cause disturbing controversies. Adversaries see an uncritical, almost dangerous admirer of megalomania and authoritative or despotic structures. On the other hand, advocates appreciate him for his ability to confront various forms of evil without any ethical inhibitions. Evil seems to attract this artist, and so he does not hesitate to use the Nazi salute in his performances. Of course, it is not only Hitler who figures in his unconventional creations. From the very beginning, he has dealt with such characters as the Marquis de Sade, a notorious advocate of evil, or Stalin. During his productions, Meese sings, cites Nietzsche, Hegel or Wagner, howls, gets down on his hands and knees, undresses and dresses, spits, and hysterically yells until he is exhausted. They sometimes last for hours and are very demanding even for the audience. They are played on Meese’s sets that are painted and plastered with portraits of these characters along with clippings from porn magazines and famous publications, especially those by German philosophers. However, rather than theatre, these productions appear to be more like a chamber of horrors, which is naturally closer to the author’s phantasmagorical behaviour. It is no surprise that Meese has several times been requested to do theatre staging or even performances at Berlin’s Volksbühne theatre.

Meese’s performances draw on the celebrated work of the Dadaists in 1916 at Zurich’s Cabaret Voltaire with Hugo Ball, Tristan Tzara, Walter Serner, Emmy Hennings, and Hans Arp. Even Meese is not a saint. In good, he sees evil, and he does not have a benchmark for evil. Thus, as an artist, he has taken over the role of a jester, the only one during the Middle Ages allowed to oppose even the king himself. Meese opposes everything and everyone in the name of art. As he explains: “Whether it be communism, national socialism, ancient Egypt, or Rome, nothing ever returns. I cannot hope that a revolution will break out on the street. People don’t have it in them. That’s why we should try to make something else happen. A volcano of art should start to erupt.” And that’s why a dictatorship of art should be established in the name of love, humility, and respect. A dictatorship—only a truly outrageous artist could have come up with something like this. But were the dictatorships of the past, whatever they were promoting, less insane? Meese would answer as follows: their downfall was precisely that they were not insane enough. 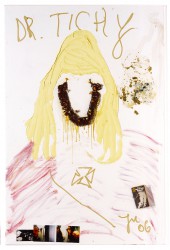 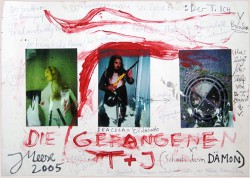 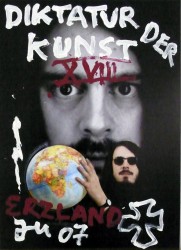