Born 1957 in Auckland, New Zealand, lives there and in Berlin

Enormously powerful, nearly aggressive, and always full of vitality—such are the structures in the works of Judy Millar. Painted in a deep black, they spread out across single- or multiple-colored backgrounds. We can almost see the artist as she struggles in uninhibited movements with the paint and canvas. “Without our body we don’t exist, this to me is our experience of the world and this is what paintings can directly address.” And so she erases, wipes away, and scratches the canvas, which her physical exertion transforms into a painting containing traces of the struggle.

A particularly impressive echo of this battle can be found in Ferryman (2011). Do we not see a ferryman trying to bring his ship into safe harbor in the face of a raging storm, surrounded by the churning sea and roaring wind, with an agitated flock of birds accompanying him, half flying, half plummeting? Fine, Millar has nothing against such figurative associations, but she has no particular motif in mind. Instead, she is interested in the act of painting and the impact of the painting as such. When she starts to work, she spreads out the canvas in front of her on the ground, because the diluted paints would otherwise run. She often uses various tools to extend her body, thus creating gigantic footprints of movement. “This gives me the feeling of being dimensionless,” she says. By experimenting with ways of overcoming the limitations of the body, she ends up expanding the physical painting as well. With the help of printing techniques, her works become oversized. In works such as The Path of Luck (2011), the feeling that the structures’ broad gestures might spread into the exhibition space and envelop the viewer are made physical reality. The paintings penetrate the exhibition architecture in giant trajectories. They are thus more than fixed moments in time. In order to encompass them, the viewer must move along their length. The painting thus passes by like our everyday surroundings and like life itself—things appear and disappear again. “So my work is really more about appearance and time than it is about space —about things coming into and going out of view, about images forming and images disintegrating, about trying to reconcile our embodied existence with our mental existence.” 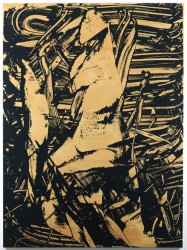