Daido Moriyama’s photographs are rigid and yet full of life. This is life on the fringe of society amidst the megalomaniac city of Tokyo in the infamous quarter of Shinjuku, known for its cluttered, narrow streets and exuberant night life. For more than 40 years, Moriyama has followed this den of human vices, lust, and passion from the perspective of a voracious hunter. Egocentrics, transvestites, prostitutes, actors and struggling artists, homosexuals, adolescents, thieves, drug addicts, and adventurers appear on his mainly black-and-white photos. For several seconds, they become the centre of attention in front of his camera. Pulled out of their wretched banality, they give the feeling of standing outside of time and space. This imparts on them a certain theatricality, sometimes almost tragedy. As if something ominous was lying behind these outsiders, somewhere in the depths of these narrow streets and decrepit hotel rooms. Moriyama’s first book of photos from 1967 was entitled Japan, A Photo Theatre.

Influenced by the photographer Shomei Tomatsu, who introduced austere realism to post-war Japanese photography, and also by the passion of Andy Warhol for the banality of everything, Moriyama creates his photos with a social panorama that is characterized by an uncommon crudeness. One of the ways he achieves this is by taking his shots from the hip without even looking through the lens. Thus, the resulting, often blurred and distorted frames of reality give the feeling of intensity and crude authenticity that are capable of provoking. Like his friend, the photographer Nobuyoshi Araki, he consciously breaks down the social rituals and taboos that were still smothering Japanese society in the 1960s and 1970s. It is a conscious attempt to reach a certain immorality that connects these two artists, who were the first Japanese photographers to become successful outside Japan. 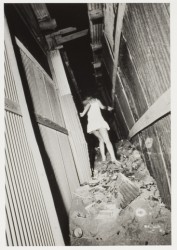