“I try to simulate the dreamlike through paint­ing. I admittedly prefer the viewer who accepts it as what I essentially want it to be, namely a tightly woven concentrate of sen­sory structures that touch the senses. And if you spend more time grappling with it, you might come upon yet another narrative.” Thus Neo Rauch, one of the best­known living German artists, said in his typical focused earnestness at a press conference for his exhibition Begleiter (Companion), held in 2009 in Leipzig and Munich.

Rauch studied painting at Leipzig’s Acad­emy of Visual Arts in the 1980s; thanks to the increased interest in German art after the fall of the Berlin Wall (fueled primarily by American collectors) he attained international significance under the heading of the “New Leipzig School”. Rauch’s large­ format paintings are painstakingly­-wrought pictorial col­lages whose muted colors have a tinge of the nostalgic. Figurative subjects from everyday life and history, variably presented in the guise of Socialist Realism or Romanticism, are interrupted by the abstract and the surreal. The nesting of perspective and depicted events, of motif and time, release heterogene­ous emotions, often including unsettling un­ certainty and a meandering, never­ending way of reading, as in a dream. At the same time, his works reflect the disintegration of a soci­ety characterized by egoism, in a world that would appear to have lost its bearings.

Rauch does not work with preexisting visual materials from books or magazines—templates that, taken as a whole, might anticipate the final work. His visual worlds originate from dreams and “influxes” that, influenced by the outside world, form an internal archive. A work’s completion is pre­ ceded by a months­ long process in which Rauch works on several pieces at once that mutually fertilize one another. Since Rauch does not work conceptually, but transfers impulses directly onto the canvas, he is recep­tive to the influences of inner and outer pic­tures until the last moment. It is the “elemen­tal interest in things”, which is what painting means to him. There are no disruptions in this way of working. Rauch himself professes a Goethian conservatism that prefers eternal truths to the revolutionary: “There is only one flowing and streaming and meditation upon what to add or omit, what to risk, but always only within the realm of what the last painting has just barely permitted in order to enable to next.” 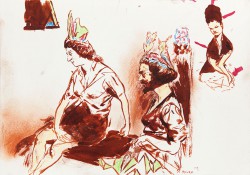