Born 1962 in Eutin, Germany, residing in Berlin and Vienna

Daniel Richter was and still is an active member of the leftist independent movement, pro­moting radical events such as occupying buildings or protest marches in German cities. He was also engaged in the punk music scene—designs for the album covers of the Ham­burg label “Buback” were actually his first works of art. Richter also manages this label. Thus, political activism and punk are at the root of his work, and that is important to know.

Richter studied at a Hamburg art school with Albert Oehlen and Martin Kippenberger, typical representatives of painting from the 1980s. However, he belongs to a generation that differs in some ways from the previous. In what way? Richter began as an abstract painter, but he was particularly interested in the colour and structure of painting, i.e. the purely technical side of things. Over time, even figures started to sneak in to his colour­ful surfaces. Today, his pictures are mainly figurative, often with explosive political and social themes, but his focus on the painting elements, such as colour, lines, surfaces, layers remained with him. And this is exactly how they differed from the pictures of the 1980s generation which understood painting mainly as conceptual, and the skill of execution was almost deliberately ignored.

Richter primarily finds themes for his pictures in the mass media. And it is mass events, even political or pop culture that he is mainly interested in, as well as being up-­to-date–so we see the Love Parade in Berlin, rock concerts, demonstrations, revolts, or just a bunch of young people in the suburbs. The execution of pictures is also current, appealing to the world of gaudy advertisement, rock and psychedelic posters and the aesthetics of the Rocky Horror Picture Show, as well as the vision of artists such as Francisco Goya, James Ensor or Edvard Munch. Richter’s painting in the present fulfils the function of historical painting as we know in its superb execution from the 19th century, for example. The often huge surfaces are teeming with rockers in leather gear, dreamy singers with a guitar or hooded demonstrators that seem more like ghosts from the world of Michael Jackson. “All of the sudden, a melancholic blues singer appears, a poor hero, in another, the lost soul of a soldier encroaching on enemy territory.” This is how Richter describes what is happening in his pictures which often seem frightening and—he hopes—sometimes even grate incessantly on your nerves. 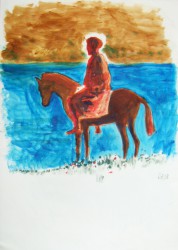 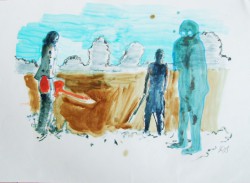