In his paintings, sculptures, sound installations, films, and photographs, Julião Sarmento’s interest is focused on the human body—or more precisely, the surface of the human body behind which something mysterious, seductively dark or dangerously vulgar is hidden. Sarmento is a multimedia artist, a common occupation for young artists, but not so much for members of his generation.

His colour and black-and-white photographs contain mostly women: clothed, half-naked, in lingerie, standing innocently, sitting in a chair, posing vulgarly; women as a danger, a threat, but also as a passive sexual object. His works are influenced by the English Romantic Lord Byron, the French Surrealist scholar and thinker Georges Bataille and his Acéphale, a headless monster that lives only by instinct, and the pornographic-sadistic fantasies of Marquis de Sade. Sarmento admits to all of these influences, which are especially apparent in his sculptures. One is a life-size sculpture of a young woman, three-dimensional in nature, with transparent skin. She is dressed in a black dress with a rope around her neck attached to the wall. Instead of a head, however, there is only a stub—like Bataille’s headless Acéphale. Others include a woman sitting at a table, the palms of her hands placed on the table like a well-behaved schoolgirl, with a black cloth over her head.

Sarmento’s paintings are somewhat more reserved than these sculptures. Black monochrome, sombre looking silhouettes of women appear against a white, sometimes slightly grey background. The outline of a breast with a nipple, a female profile, interlocked arms, a kneeling body, two women standing in front of each other. Especially poetic are those images in which the body parts are contoured in graphite on a greyish-white, often disproportionately large background: two hands linked together by their little fingers, a hand being stabbed by another hand holding a knife, a headless woman’s body dressed in black, the outline of a woman’s hips, or shapes that resemble a man’s sexual organ. 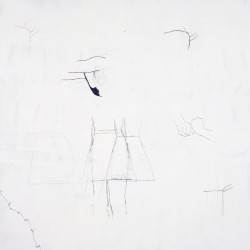