As a young boy, Bernhard Schobinger saw the figure of a pelican feeding its children blood from its own heart on a crossbeam at the Hergiswald pilgrimage church in the Canton of Lucerne. For the later jewelry artist, this Pelican myth became the most formative experience of his childhood. The visit to this magnificent church, Schobinger recounts, “was a mystical experience for me that led to my desire to become a goldsmith in order to be close to this realm and to spend my life within it.” Many years later—in the meantime, Schobinger has become one of the world’s most renowned jewelry artists with exhibitions, among other places, at New York’s MoMA—he fashioned Pelican Red Ink Pad (2003–2006). Hanging from a red necklace is a pendant with the stylized image of the pelican—an inkpad from the German company Pelikan. Lying like eggs on the blood-red pad inside are two Tahitian pearls. Schobinger is known for combining valuable materials typical for jewelry (such as gold and diamonds) with seemingly worthless objects such as discarded wire, old screws, and shards. The creative act of finding and bringing together heterogeneous materials reaches a peak in works that are both pieces of jewelry as well as works of art possessing an almost alchemist electricity. The creative use of symbols and the inclusion of a diamond in the inkpad’s lid—since the “the bird’s unconditional sacrifice for its young [possesses] tremendous radiance”—lend the work a profundity not commonly found in jewelry. Schobinger regrets that, over the course of cultural history, jewelry’s original magical and mythical aspects have slowly dissipated. In addition to the prestige that it possessed as early as in the Paleolithic, western society has emptied jewelry of its metaphysical meaning so that the only thing remaining is its absurd and mutually agreed monetary value. In his works, Schobinger takes a clear stand against this reduction to economic value and jewelry’s diminished symbolic meaning. The expensive pearls lie hidden within the inkpad, which is worn around the neck with its lid closed. These “eggs” (a symbol for the circle of life and death) are as safe and secure as the children in the care of the pelican. The manner in which the material is used informs intent and imagery. In the words of the artist, we are “tempted to see the fact that ‘everything is related to everything else’ as a universal truth.” 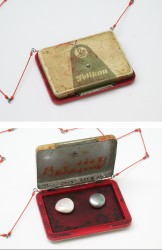 “Pelican Red Ink Pad” for Tichý – for Roman – for Sophy