When new media, such as video and photography, first asserted itself in art in the 1960s, it was primarily female artists who adopted this media as their own. This was due, among other things, to the fact that it did not fall within the conventional sphere of interest of male artists at that time who dominated in particular painting and sculpture. Another reason was that this media allowed female artists to deal with the issue of their own identity in a much more intuitive fashion. And it is precisely this identity of women and female artists in relation to society that Katharina Sieverding engendered from the very beginning. As she explains herself, for more than 40 years, she has dealt with “identity as individuality and collective individualization”.

Her series of large-format photos from 1973 entitled Transformer is still known today. Larger than life, we see her self-portrait, over and over again. The face is manipulated, and sometimes even meshed together with the portrait of her life companion, Klaus Mettig. Hence, we are faced with the questions: Which part of the face is still female and which part has become male? And what about expression? Is it masculine, or are there still signs of femininity? Is there any clear line between a woman and a man? And how can a female artist present herself without following in the footsteps of her male colleagues? These are questions that occupied the minds of most female artists in the 1970s.

In other works, Sieverding combines her own shots with press photographs. She alters them and integrates them into distinctive images, inspired by the aesthetics of advertisement. However, instead of the ordinary topics found in advertisements, she instils into the pictures explosive political and social content, such as nuclear energy, pollution, and violence. She often projects her images directly onto the wall, and in doing so, creates fascinating, colourful spaces that are aesthetically pleasing as well as disquieting. As Sieverding explains, they are hybrid flat images and spaces somewhere in between truth and fiction, between iconoclasm and pictorial transposition.

In her series Projected Data Images Sieverding has returned in recent years to her own images that document her life on the art scene. The reworked sample prints from years past make us conscious of the fact that photography, as understood by Roland Barthes, is capable of freezing moments and saving them like a memory. 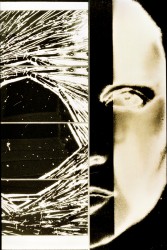