Gerda Steiner and Jörg Lenzlinger’s installations are proof that art that seriously explores the state of our world can also be humorous, playful, and even a little mystical. One example is their installation Giardino Calante from 2003, which was exhibited at the 50th Venice Biennale. In the baroque church of San Stae, which is consecrated to St. Eustace and was built by Doge Mocenigo, the artists created a garden for the stag thanks to which Eustace became a saint. Hanging from the church ceiling on strings like a giant bunch of grapes were thousands of small and large, inconspicuous and by contrast colorfully radiant objects that visitors could observe from a bed located over the doge’s tomb. Natural objects were mixed with artificial—plastic flowers from India, dried cow patties from Switzerland, cats’ tails from China, paper from Venetian garbage cans. And precisely this is the artists’ focus: the border between natural phenomena and artificial creations.

As a result, their installations tend to include urea crystals from an artificial fertilizer solution—the synthesis of urea in 1828 was the first time a natural process was started artificially. Steiner and Lenzlinger even let the crystals grow during the exhibition. At the end of the exhibition, they dissolve them again and use the solution for their next project. For these artists, it is especially important to call attention to the process of growth and decline that is endlessly repeated in their installations, as well as in nature—which our modern world tries to outdo.

In 2006, Steiner and Lenzlinger created an installation titled Das vegetative Nervensystem (The Autonomic Nerve System) in the 20-meter high lobby of the Museum Kunstpalast in Düsseldorf. Using branches, twigs, and leaves, the artists created something like the crown of a tree—except that instead of tending to rise upwards, it spreads outwards in all directions like nervous tissue. For centuries, trees and their vertically organized hierarchical structure represented an image of society and served as a model for structured knowledge. In the 1970s, however, the post-structuralists Gilles Deleuze and Félix Guattari proposed an alternative to this hierarchical tree in the form of a root, intertwining in all directions like ginger—what biology calls a “rhizome”. This model, convincingly portrayed in Steiner and Lenzlinger’s installations, is finding increasing confirmation in both the social sciences as well as in our ideas of knowledge itself. 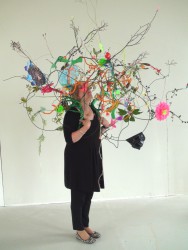 Meanwhile in The Bush – Head Piece 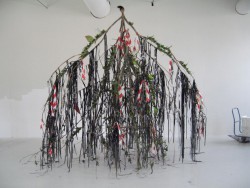 Meanwhile in The Bush – Shrink Head 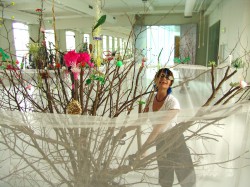 Meanwhile in The Bush – Cozy Bush