When the autobiographical photography of Annelies Štrba first appeared in the 1990s, it produced quite a sensation. Perhaps no other artist up to that time had attempted to document their own childhood and motherhood in such a spontaneous manner, or to disclose this to the public. Motherhood, children, and intimacy were taboo. But not for Štrba. In an endless series of projected slides, Štrba allowed the public to peer into her childhood in Switzerland with her Czech father. When she herself became a mother of two daughters and a son, she began to obsessively record the development of her own children, from birth, through puberty, and even when they became parents themselves. Thus images pass by us of children sleeping, laughing, eating, taking a bath, or their first attempt at putting on make-up. Štrba’s photos are in fact nostalgic records of an imaginary paradise for children, filled with tenderness and intimacy. In addition, the spaces full of old furniture in which the infantile world takes place as well as the technique intensify the nostalgia of the photos. The images are mostly unfocused, often over-exposed and crudely developed in her own darkroom. This all produces a certain feeling of melancholy, similar to how each of us remembers the irrecoverable moments of our childhood. And it is precisely these images by Štrba, with her instinctive female approach, that opened up the door for another Swiss artist, Pippilotti Rist, or Gerhard Richter and his portraits of his wife with a newborn baby.

Štrba also managed to bring a certain romantic dreaminess to video and film, for example, in her series of photos about cities. In 2001, she produced a film about New York, a hypnotizing vision in which skyscrapers rise above the fog like gravestones. The individual shots are in such slow-motion that it is difficult not to think of Warhol’s 16-hour static scene of the Empire State Building. Paris in front of her lens fossilizes into monumentality more beautiful than reality. And in the film Street Parade 1, also from 2001, capturing the Berlin “Love Parade”, there are shots of crowds, electronically processed so that they create independent, beautifully coloured pictures that remind us of when art had something in common with beauty. Yet, Štrba’s pictures are about transient and timid beauty that does not in any way demean the fragility of soap bubbles released into the air by two sisters in the film Sedmikrásky (Daisies) by Czech director Věra Chytilová. 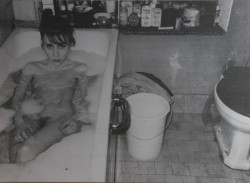 Sonja in the Bathtub 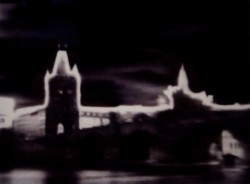 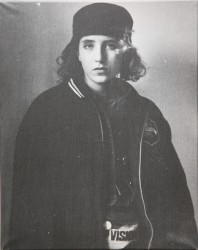