The individual and the crowd—this is the theme that has appeared more and more often since the 19th century, not only in social theory, but also in literature. This theme was taken up by the American author Edgar Allan Poe, the French poet Charles Baudelaire, and also the Bulgarian-born author Elias Canetti. His book Crowds and Power is a classic work about the connection of crowds and power—a phenomenon that greatly influenced the 20th century. The crowd that tramples everything, the crowd that makes individuals into mindless integral parts of the whole, the crowd that stamps out any attempt to be an individual… Nevertheless, artists must express themselves individually, and thus it is surprising that such little attention has been paid to the art of this relationship between the individual and the crowd.

Beat Streuli is an exception. The “crowd and the individual” is his specific theme. In New York, Tokyo, Zurich, Düsseldorf, and Sydney, he plunges into flowing crowds, he unleashes the pulsating rhythm of the crowd and merges with it—except for a short moment when he seems to stand out from the masses, aiming his telephoto lens at an individual, and from a safe distance, snaps a photo. With this action, he pulls this person out of the relentless rhythm—and for a moment, restores this person’s individuality. Streuli then enlarges these photos and sometimes projects them on the walls of buildings or installs them in public spaces, such as airport halls.

On these huge photos, we see faces, sometimes parts of their bodies; an energetic woman walking with a child in her arms looking over her shoulder, a young Japanese girl with a distant gaze, a self-confident man strutting in an expensive suit, two young girls with flowing hair squinting at the glaring sun, an African woman staring off into space… Their gazes often seem to be distant, even absent, despite a certain level of wariness that emanates more from their firmly held bodies than their gazes. They are in constant motion caused by their subconscious effort to keep up with the crowd, to be a reliable part of this pulsating, sometimes never-ending course of events that sometimes has not yet started. Suddenly it is, as if all of these people, caught on camera in cities thousands of kilometres from each other with very different cultures and religions, had one thing in common: a fragmentary gaze, an apparent absence of mind, and yet an innate ability to succumb to the rhythm of the pulsating crowd. 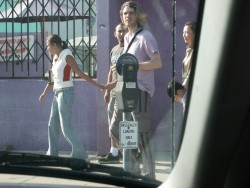