The art of Keith Tyson seems to want to encompass the entire cosmos: the natural sciences, philosophy, mathematics, aesthetics, and science fiction. To this end, it uses speech as its starting point. Tyson first gained attention in the 1990s with his “Artmachine”, a combination of computer logarithms and books into which he entered various words and similar concepts. He then converted the randomly created word combinations into drawings, paintings, and objects that he exhibited under the title From the Machine. He collected more than 14,000 such ideas, of which only a fraction has been exhibited.

There followed Tyson’s History Paintings, which consist of red, green and black stripes whose order was randomly determined by a roulette wheel. The names of the paintings—for example, St. Petersburg 1905—referred to famous casinos. In another set of paintings, made between 2005 and 2008, Tyson left everything up to chance. He covered aluminum panels with paints, pigments and chemicals, and exposed them to various temperatures, lighting, and mechanical influences. The results are color paintings reminiscent of fantastical landscapes, psychedelic patterns, or expressionist abstract paintings. And because they were created by nature, he called them The Nature Paintings.

Tyson’s most noteworthy work so far is his Large Field Array at New York’s Pace Gallery in 2006. In this installation, he used a modular system to fill a gallery and its walls with a diverse range of objects, including a copy of millionaire Donald Trump’s wedding cake, the logo of the London Underground, a chair in the form of a skeleton, or a lunch designed for space flights. This maze of Pop cosmology was open to any associations.

Tyson’s exhibition at the London headquarters of Deutsche Bank, 12 Harmonics, was no less spectacular. The cosmology of the 21st century plays out on several aluminum panels 3.5 x 2 meters in size. Each panel is assigned, as Tyson describes it, a certain “numerical essence”. On the first we can see the sun, while the last depicts the moon. Six are dedicated to the day, six to the night, and the seasons of the year are addressed as well. The panels contain everything, from the chemical formula for hydrogen and the famous smoking cowboy from Las Vegas all the way to Michelangelo Caravaggio’s Amor—everything that, as Tyson says, contributes to “a joyful visual experience”. Few artists today are capable of encompassing the entire world with such an almost Renaissance generosity. 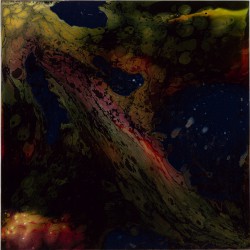 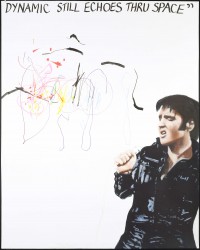