From the very beginning, the camera lens was associated with objectively capturing reality, as opposed to a painter’s brush. Bernard Voïta, however, defeats this notion with his photographic works. Although he uses a lens, his work contradicts everything that we understand as photography.

Since 1994, Voïta has created an array of works in his atelier from everyday, often randomly found objects that he then photographs from various perspectives, distorted views and with varying illumination. The result is all kinds of abstract models, lines, architectural images and landscapes, even pseudo-realistic objects such as lounge chairs or cameras. However, this is only at first glance: a more attentive eye soon begins to break down these landscapes and objects into what they are made of–heating elements, pots, slats, buckets, and metal rods. This makes audiences anxious and confused, and they begin to doubt what they are seeing.

Even more complicated is his series Paysage ahah (Landscape ahah), which Voïta has been working on since 2009. As the title suggests, it relates to a landscape. Each image in this series is made up of two layers: the first is a photo by the artist constructed of an architectural motif, the second a glass plate printed with a photographic image of a real landscape. Voïta places this plate in front of the first layer in a frame. The result is a picture combining strict architectural form and an uninhibited lush landscape. In addition, the fact that the print on the glass plate casts shadows on the photos from behind the plate not only creates a third layer, but also gives the feeling of a scene from a theatre performance. Illusion and reality are inseparable.

At the same time, Voïta also worked on the series Caméras. He combines an assortment of objects in his studio that he then photographs in such a way that they resemble cameras. Here again, it is just an illusion. Taking a closer look, the already well-known heating elements, pipes, pots, etc. appear before your eyes. In fact, it is only the shot of the lens that gives this jumble of objects the form of a camera. And this is where the irony of Voïta’s work comes in: instead of the lens documenting reality, it deceives us. What are these photos other than a deception? But as the often quoted seventeenth century philosopher, Baruch Spinoza, knew well: every really new idea is first a conscious deception. 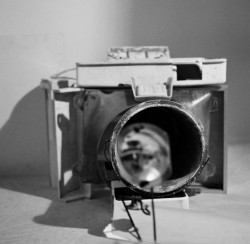 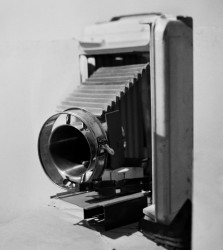