Perhaps everyone interested in art during the last half-century knows the series of photos in which a young woman walks through town in a Persian lamb coat with a man on a leash. The woman is the Austrian artist Valie Export, and the man in the role of the dog, is now a professor and director of the Centre for Art and Media Technology (ZKM) in Karlsruhe, Peter Weibel. This street performance, entitled Aus der Mappe der Hundigkeit (From the Portfolio of Doggedness), stirred up a lot of attention in Vienna. This happened in 1968, the year of the student revolts, and as a young artist, Weibel participated in a public event at Vienna University, Kunst und Revolution (Art and Revolution) together with Günter Brus, Otto Muehl and Oswald Wiener —later known as the Viennese actionists. While singing the Austrian national anthem, these artists went beyond all of the thinkable social taboos, including urination and masturbation in public. Breaking the law and clashes with the police were, of course, intentional, just as in the work of Export, who consciously integrated women’s emancipation into the work of the Viennese actionists.

Weibel’s work does not only focus on provocative actions. A main part of his agency is also language. Influenced by prominent linguists of the 20th century, Ludwig Wittgenstein, Roman Jakobson, and John Langshaw Austin, he experiments with language in relation to the body and society. The result is various performances, installations, films, and videos. Weibel is a pioneer of video art, and he was one of the first artists to start working with the Austrian TV station ORF in 1977. As a former student of mathematics, Weibel is fascinated with new technology, especially computers, which became a part of his artistic endeavours early on. Thus, he created a costly installation that interacted with the public. Weibel also writes, publishes, and gives lectures. He has become one of the top theorists on art and communication in the era of new technology. Nevertheless, he has not given up on other artistic ventures, often combining poignant humour. A typical example is his Self-Portrait with Knife from 1973: a black-and-white photo in which the artist’s face is reflected in a sharp, polished knife. In recent years, though, Weibel has focused more and more on the role of art agent. In 1999, he became the director of ZKM in Karlsruhe, which features many unique exhibitions and experiments relating to art and the new media. 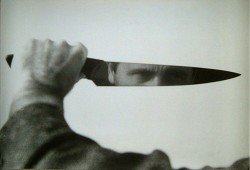