Vicious slapstick, seductive pop, nostalgic futurism—the art of Andro Wekua, an artist of the generation entering the art scene after 2000, could be described in this way. What characterizes this generation, represented also by Thomas Zipp and Andy Hope 1930, is their surrealistically expressive approach to reality. There are no sociologically motivated projects, typical of the post-conceptual art of the 1990s, but only an authentic plunge into hard reality.

Even Wekua is attracted to the crudeness that only life can offer. His collages and sculptures, usually presented as an integral part of the exhibition spaces, never convey a clear, let alone naïve, picture. Sometimes, they can even be described as gruesome, as in the installation Get Out of My Room Part I from 2006. We see a sculpture of a boy sitting on a chair with his legs crossed on the top of a large table. The boy is dressed in a white shirt and white socks with carefully laced shoes. However, he is not wearing any trousers. His face is disfigured. Just what are we witnessing here? And what are we getting into? The realm of sexual fetishes or perhaps even paedophilia?

Wekua’s children and women are almost always witness to the excesses of sexual behaviour and social order. However, this is never clearly defined, as if Wekua wanted to get to the core of the situation over and over again. Nevertheless, it is a futile attempt. You can never get closer to sexual trauma and pure violence, because whoever tries this gives in to obsession. And obsession is decisive in Wekua’s work as well—in fact, even at first glance when there seems to be no sex or violence at all. At the 2011 Venice Biennale, he presented Pink Wave Hunter, models of buildings from his hometown of Sukhumi on a huge platform, which he created from his memory. However, instead of a work of art, this row of buildings resembled some kind of testimony that tells a story of unbelievable crimes. Why is this?

One of Wekua’s last works is the colour film Never Slept With a Strawberry in Your Mouth from 2010. It is a film that is mysterious and seductive at the same time, and as if it were beyond time. It is difficult to say whether it is a futuristic vision or a nostalgic fantasy. Wekua’s works are visions on the edge of perversion and pathology. Are these warranted? After all, they reduce the meaning of art to a mere recorder of psychiatric obsession. But yet they are still needed, because they interfere with rigid social order 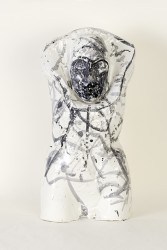 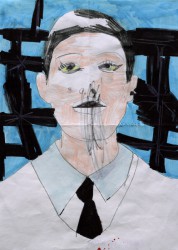