Georg Winter is interested in “interrupting and subsequently removing the usual process”—at least that is how he puts it. He achieves this goal in various ways. The simplest is by creating wooden models of implements such as a camera or mobile phone, and then inviting visitors to his exhibitions to use them like the real thing. A person holding a useless wooden phone suddenly and with a completely different intensity realizes the functions and possibilities of tools that he otherwise uses automatically, unconsciously.

As part of a project entitled UCS Massen-Fernhypnose (UCS High Mass Telehypnosis)—held during a 2010 exhibition at the Museum Folkwang in Essen—Winter invited visitors to subject themselves to telehypnosis. Under the supervision of Zurich-based psychiatrist Roman Buxbaum and in cooperation with Brazilian hypnotist Vicente de Maura, visitors relaxed on cots and consciously submerged themselves in a world of peace, free of external influences and sensory input. Afterwards, those who wanted could have the artist put some drops in their eyes, which can be slightly irritated following hypnosis. Those who did not want to participate in the hypnosis were told to repeat the sentence: “I do not wish
to participate in the hypnosis.”

Winter’s most spectacular project so far is probably his performance STR – Space of Total Retreat, which he also presented in 2010 in Essen. In the middle of town, he had a simple wooden structure reminiscent of a hermit’s shack built on top of an elevated pedestal. In front of an audience, the supporting beams were removed one by one until the building collapsed. Thus a predictable process is set into motion: Immediately someone calls for help, and soon we can hear the sirens of the fire engines on their way to the accident. The area is sealed off, hoses are taken out, people hectically run around, a trained dog appears on the scene, and from inside the pedestal—which appears to have survived the building’s collapse intact—we can hear voices. The firefighters cut an opening into the pedestal in order to liberate the people trapped inside. Stretchers are pulled out, and photographers rush to the scene of the accident from all directions. But wait: the people on the stretchers are just emergency dummies.

All of a sudden, everything is different: reality is mixed with fiction. What is real and what is fiction? As with the wooden telephones, once again an automatic process becomes real—a real, if only pretended, tragedy. Real, because we are conscious of it. 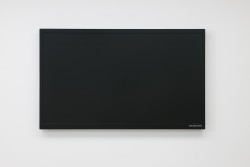