“Quick and sure the ladies’ needles moved back and forth. But where the mother kept her eye on her work, from time to time the daughter, who bore the name Effi, put the needle down and stood up (…) ‘This dull embroidery.’” We all know the outcome of Fontane’s story of this girl, who would rather play on the swing than to pursue the well-mannered occupation of women. Angelika Zeller has appropriated embroidery as an artistic technique in order to present a critical personality profile. She uses needlework, through which women spent centuries embroidering their suppressed passions and decorate their households, to create a structure of aggression and pictures of evil. Her portrait of Hermann Göring stares at us from the embroidery on a kitchen towel; the Child Murderer Ronny Rieken is “embroidered with flowers on skirts”. The titular individuals and their crimes may be real or imagined. For instance, it remains unclear whether the Murderess, [who] killed her sister with 17 jabs of the scissors actually existed. By comparison, the clearly visible technique makes the violent act of stabbing eerily present. In Zeller’s work, embroidery loses its innocence and becomes a surrogate act through which the embroidered images act like mirrors of our own aggressive potential. The hysterical synchronicity of stitches causes even unfamiliar faces to feel unsettling. For example, the face with open mouth (Portrait, 2002) is an arresting depiction of the despair felt at having failed to break free of the structures that have shaped it. The stitches seem to strangely hold back the screaming woman’s emotions. The work, which is part of the series Four Portraits, was embroidered on the basis of several photographs, but—as if to underscore the human act of fusing into one—is formed into a little pillow. That which cannot be put together into a uniform picture on the front, reveals itself on the embroidery’s reverse to be a chaotic tangle of thread. As with a person’s mental state, it is hidden beneath the façade. The resulting image shows an attempt at keeping one’s countenance. In the constructive process of “getting a picture” of something, it is the surface that is punctured. More recent works such as the series Cobwebs (2011/2012) are marked by a filigree lightness. Bodies and faces of lightly woven threads hover like sketches in the air and on the transparent textile, sensitively conveying the fragile nature of human existence. 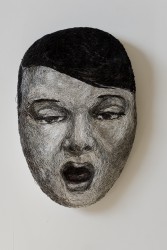 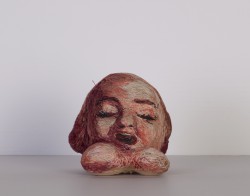 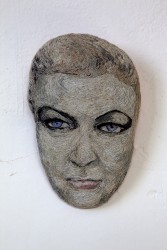