“Dystopian Hermeticism”—this is what the prominent German critic Jörg Heiser referred to as the newest tendency in contemporary art. In addition to the French artist Cyprien Gaillard or the Georgian artist Andro Wekua, Thomas Zipp is one of the typical representatives of this movement. Zipp’s installations, which change the exhibition space into what is called a Gesamtkunstwerk in German, are not only mysterious, and thus hermetic, but they also pessimistically oppose utopian ideals, and therefore are dystopian. While utopian ideals strive towards an illustrious future, Zipp’s pessimistic outlook turns primarily to the past. Or as the French philosopher Alain Badiou once said: Our world is not only made up of the present, but also essentially of all those eternal truths that in regular intervals seem to come back to life and thus are reasserted, because no truth in this world just disappears. In fact, these resurrected truths often get in the way of utopian ideals like taunting grimaces.

Indeed, Zipp’s installations look like such taunting grimaces. His pictures and sculptures, which are theatrically staged in exhibition spaces with the help of light, curtains and colourful walls, create a unique world, inhabited by psychonauts, as Zipp himself calls these actors. These include the German reformer Martin Luther, the German physicist Otto Hahn (who split the atom), and the Californian advocate of LSD Timothy Leary. On large canvases resembling medieval maps, Zipp explores the spread of Luther’s ideas throughout Europe. What began as an enlightening gesture quickly changes into a demonic rampage that sends all of Europe into a merciless maelstrom of wars. And what about the atomic bomb! And what if LSD really expanded the human conscience, as Leary believed? Zipp is always interested in this breaking point when obscurantism arises from pure faith, occultism from exact science, fanaticism from social sentiment, and (on the contrary) when mystic or occult notions such as those popular in California’s psychedelic rock and pop subculture of the 1960s give rise to an emancipation accompanied by an explosion of creativity. This is what happened in California, home not only to Jenny Jopling and John Baldessari, but also Steven Jobs. This moment in time, this turning point where energy is released is what Thomas Zipp has frantically tried to create. As often stated by Zipp, a rider of the underworld of human creativity, there is nothing more deceitful than lethargy. 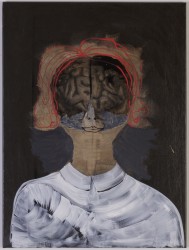