Modernism in the form that established itself in the Western world after 1945 was characterized by universality, perfection, and timelessness. For theoreticians and artists, modern art, above all abstract art and sculptures with strict geometric forms, was supposed to be comprehensible by everyone, regardless of cultural or religious traditions, expressing perfection and eternal relevance. Modernism believed that abstract art, originating in Europe at the beginning of the 20th century, was the highest and final stage of progressive development. Everything else, whether figurative painting or folk art, was regarded as inferior.

Artist Shahin Afrassiabi takes a stand against this claim to hegemony. In his installations, sculptures, paintings, and photo- graphs, he deals with the European claim to universality, perfection, and eternal legitimacy in a satirical fashion. For instance, in the middle of an exhibition hall, he built an asymmetric structure from wooden slats that appeared to be scaffolding rather than a traditional work of art; the parts of the structure gave the impression that they were just haphazardly connected—nothing is perfect, as opposed to the industrially manufactured structures of modern minimalism. This work, consciously reminiscent of works by Russian constructivists, intentionally flaunts the transitory nature of things, instability, and frailty, which was unimaginable in modernist works.

Afrassiabi’s installations often resemble scaffolding, which has a menial, supportive function in everyday life, even in creating sculptures. However, in exhibitions, it changes into a work of art that is distinctive in that it denies any function at all. This artist thus transforms not only the function of certain objects, but also their semantic sense, which modernism asserts is firmly connected with form and therefore is universally valid. Afrassiabi rejects this, saying that interconnected slats can be scaffolding, a fence, and just as well a work of art. Similarly, gaudy vases placed in a line, if they are exhibited, can become a sculpture.

Afrassiabi accompanies his work with colour photographs of walking girls, taken with a cheap digital camera directly from Internet images using Street View. These blurry images remind us not only of Miroslav Tichý’s amateur photos of girls and women, but also the frailty and transience of our own everyday life, even though it is so foreign to European modernism. 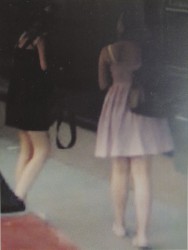