Born 1944 in Paris, France, lives in Malakoff near Paris

The upright box could easily fit a person and be his place of last repose. But the cold metal in place of organic wood is more reminiscent of an archival vessel than a coffin.

The work’s foundation is a black-and-white photograph of a woman in a bikini sitting on the shoulders of a young man. The holiday snapshot’s carefree nature stands in contrast to the morbidity of its presentation. Enlargement has increased its blurriness, further emphasized by the photograph’s ephemeral nature. The future death of the subject—according to Roland Barthes, this is what photographs depict—is here mediated by an awareness of death, shifted into the present.

In these and other works from Christian Boltanski’s series Reliquaire, les linges, the photographs are often accompanied by textiles. In a work from 1999, he uses white scarves lying randomly at the edge of the photograph. The material physicality of the fabric forms a counterpoint to the smooth and reduced tactility of the photographic medium.

Between the tactile presence of the scarves and the physical non-presence of photographs and the dead, there exists a direct arc of tension between presence and transcendence.

In religion, contact relics are objects that are not part of the person in question, but that he or she came into contact with. One of the most important is the Veil of Veronica, into which Jesus wiped the sweat from his face on the way to the cross. Like a photograph, his face remained imprinted on it. But the protagonists in Boltanski’s works are no saints; they are “unimportant”, anonymous people whom Boltanski includes in his artistic archive of life and death.

The subjects of identification and ephemerality in relation to photographs and personal relics are also found in Boltanski’s early pseudo-documentary reconstructions of his own life. With his affirmation of his Jewish heritage in 1990, there begins a period in which he comes to terms with the Holocaust. Next to shadow theater, audio installations represent another non-material dimension of his lifelong work focused on death and memories. Boltanski is an internationally renowned artist who has received numerous awards. His works can be seen around the world, in important museums and at exhibits such as documenta. In 2011, his installation Chance took up the entire French pavilion at the 54th International Biennial of Art in Venice. 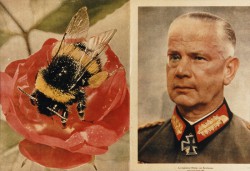