One of Polly Borland’s friends spoke about her photography in the following way: “They are beautiful with ugliness on the inside.” And hence this is how the author sees them. Ugliness in beauty and beauty in ugliness. And this is what it is about. But not only this: her photos are demeaning and humorous, beautiful and horrible, banal though unusual, provocative and repulsive. And also successful. Borland was one of the few professional photographers in 2001 who was invited to photograph the queen, Elizabeth II. Also famous are her photos of Nick Cave, the singer Kylie Minogue, and the cult star among fashion designers, Vivienne Westwood. Polly Borland’s photos have been published in The New York Times, The New Yorker, and The Independent.

Despite all of this, Borland does not particularly enjoy photography as documentation. Her photos do not document but rather create their own world in which dreams and sexual fantasy are dominant. This is even present in the already mentioned portraits that are often flagrantly colourful or conceived in a very unusual way (Kylie Minogue as if she were rolled up in a chair). Her dreams, desires and wit are then developed in series that she sometimes publishes as book editions. The Babies from 2001 is a book series of photographs with text by the American theoretician Susan Sontag, which boggles the mind of a sober spectator. It shows fetishists who dress like babies. In fact, Borland managed to make contact with the club Hush-a-Bye Baby, which organizes this type of fetish, and to gain the confidence of its members. We watch the dancing “babies” in infant clothing with old, worn legs sticking out from underneath, or an elderly man with a pacifier immersed in bath bubbles (“Julienne in bath at home”).

Similarly outlandish are the photographs from the series Smudge, in which people stand, for the most part, head-on in front of a neutral background. However, these figures have very little in common with human beings. They resemble more a world of legends, myth and fantasy. A lion’s head and a woman’s body with huge stuffed breasts, a man’s body with long flowing blond hair with a nose sticking out of it in the form of a penis, a man dressed in overalls made of sheer material stuffed with cotton balls – wigs, padding, furs, and a face that has horns instead of eyes in the shape of carrots. A world on the verge of kitsch. But why not? As Borland says, she has always been attracted to kitsch. 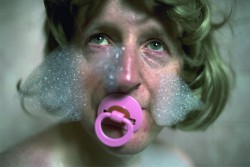 Julienne – From the series Babies 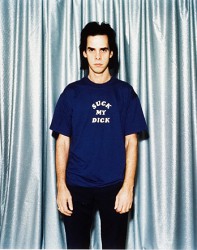 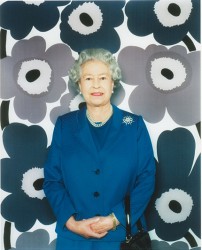