Is that reclining woman Titian’s Venus? The dog is there; the servant, too. Or is it the one by Velázquez? No. This is Margret Eicher’s Venus (2005), with fast food and a computer—a collage combining elements from the past and present.

Eicher’s digital paintings are either printed or woven onto textile–in Flanders, the birthplace of tapestries. In his famous 1956 collage, British artist Richard Hamilton depicted the ideal image of man and woman as found in the tabloid media – beautiful and athletic, surrounded by fashionable goods. As an early representative of Pop Art, Hamilton thus addressed the superficial lifestyle of his era as well as the omnipresent promises of the consumerist world. With the “recontextualization of familiar subject matter and the incongruous interlacing of visual elements with their content” and “the elevation of the trivial to the meaningful”, Eicher views her work as continuing in the tradition of Pop Art. Nevertheless, the use of digital technology and her choice of subject matter solidly anchor her art in the present day. In Eicher’s work, the extensive but simultaneously inconspicuous manipulation of images via new media and technologies is made clearly visible. The game of “appearances over reality” is more treacherous than ever—and yet, today self-promotion in the media using visual surfaces is the be-all and end-all. In this regard, Eicher’s revaluation of advertising images through tapestries (which serve a representative function) also symbolizes the value that today’s society places on illusory aesthetics. Through the visually homogenous combination of art historical motifs with contemporary media images, she also emphasizes the interrelationship between various visual sources and historical levels. In Eicher’s work, therefore, modern advertising images presented in historical attire have their iconographic predecessors in art history, and the computer game character Lara Croft (Diana with her Entourage, 2003) in the tapestry’s border (which, within the traditional meaning of tapestries, makes her a symbol of contemporary society) thus relates to the legend of Thor. Eicher herself says that she uses icons and prototypes to define a particular view of the world, just as tapestries did in the 16th and 17th centuries and just as the mass media does today. 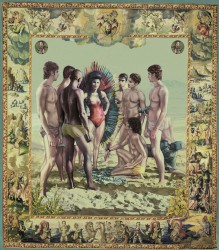 Diana with her Entourage