Since when is Donald Duck a hero with a place reserved in exhibition halls? The duck with rustled feathers sits on the ground with his legs absurdly raised in the air, with a Sherlock Holmes cap on his head and heavy boots, as if he were ready to set off on a tour of the Alps. And this is all presented in a space of 3 x 4 metres. Another example is a wooden stick with Pinocchio’s nose and feet in huge red shoes. Here he is a painter with a palette at his foot; there he is depicted as a leaping dancer. And what about the pink pig with a baseball cap, the dancing bean, a tea pot with a long nose? Where did this art come from?

But is this question really relevant anymore in a time when the boundary between art and phantasmagorical creations of mass culture is growing ever thinner? Eloyan’s pictures are in any case stirring, just in the way they are painted. Thick, sometimes brilliant, multi-layered colours often appear on huge surfaces with quick strokes of the brush. With the spectator’s persistent gaze, contours begin to emerge, revealing, for example, a face with protruding eyes and rabbit ears. The intensity created by these images is transferred to the audience, the same as the unpredictability of what can be discovered in a painting—an unpredictability characteristic of these paintings, whose final form does not become clear until during the painting process itself.

In such a way, the passionately emerging paintings move in their peculiar grotesqueness between the tragedy of the Spanish artist Francisco de Goya and the banality of American artist Philip Guston, who Eloyan is very close to, especially when it comes to the cumbersome technique of painting objects such as shoes. These paintings are tragic, partly tragicomic, and sometimes even sinister in the lucidness with which animals take on all the possible discord of the human world. In the honest naïveté with which Eloyan presents figures from the vulgar, often disgusting and rampant fantasy of the exuberant world of comics, fairy tales, legends, rock n’ roll, TV shows, and mediocre movies, they are banal as well. Eloyan’s world stands up against all romantic ideals, against all notions of beauty and harmony, of the superiority of humans over other creatures, of temperance, sophistication, and moderation. His world, teeming with savage pigs, eccentric ducks, stumps that behave like humans, is not temperate, cultivated or restrained—it is just plain human. 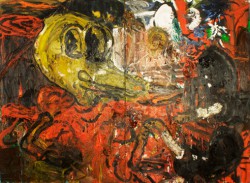 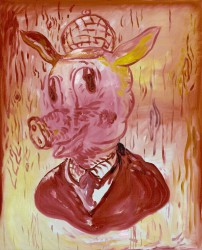