Ever since 1979, Peter Fischli and David Weiss were inseparable partners. They showed that art can be made from anything, even from salami and sausages. For example, you can carve automobiles, make a carpet shop from slices of salami, or put on a fashion show with ordinary sausages. Later, you only need to photograph everything and call it Wurstserie (The Sausage Photographs). However, these two artists entered the history of modern art in 1987 when they shot their now legendary film Der Lauf der Dinge (The Way Things Go). In a film lasting only eight minutes, the camera follows a chain reaction: a plastic bag with trash starts to move a tyre standing underneath it, which hits a platform containing a tray with chemicals, which spills into a bottle, which falls over and starts a fire … Flames, explosions, smoke, toppled chairs—the audience watches with fascination the unusual devices of these two handymen. Their film became a popular work of art in 1983 during documenta 8 in Kassel.

Humour is an effective tool for their other work. For example, in Plötzlich diese Übersicht (Suddenly This Overview) from 1981, we see 60 small sculptures made of modelling clay on white pedestals, including two guitarists crossing the street and a woman and man lying beside each other on a bed—simple, almost boring scenes. However, the descriptions make them immediately interesting: “Mick Jagger and Brian Jones going home satisfied after composing ‘I can’t get no satisfaction’” or “Mrs Einstein and Mr Einstein after conceiving their genius son Albert”.

However humorous Fischli and Weiss’ acts might seem, there is a deeper layer of meaning underneath. This is clearly evident in their films. Dressed as bears and rats, they walk through Hollywood or the Swiss Alps carrying on serious or even philosophical conversations. When these two artists represented Switzer- land at the 2003 Venice Biennale, they projected on the wall handwritten questions documenting the absurdity of human existence: “Why doesn’t anything ever happen?” or “Do thoughts create themselves?” Their theme is humour that discloses the absurdity of everyday life, as well as beauty, however absurd the notion of beauty is in today’s world. Perhaps they discover it in photographs from fashion magazines and advertisements that Fischli and Weiss organize into endless rows in an aesthetic manner, or photographs of flowers wallpapering whole rooms with them as far as the eyes can see. 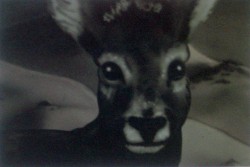 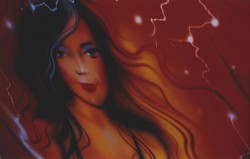