“The purpose of painting is to reveal the world. We live in a world of a lot of violence and lies… The things we hear every day are full of cynicism. The paintings show what the world is like. They are a portrait of the Zeitgeist.” This statement by Damien Deroubaix does not bode well. And indeed, his works are shocking. They show horrific scenes full of aggressive symbolism. We know the skeletal figure of Death and the maws of sharks from art history as well as from the comic-book aesthetics
of the heavy metal and goth scenes, which are well known for their fascination with the darker side of life. But we are equally familiar with such images of dread from the darker chapters of history, and last but not least from everyday life. Here, we encounter swastikas and watchtowers; there, the Stars and Stripes blending into a bar code. Like Hieronymus Bosch before him, Deroubaix shows that evil is not the spawn of a depraved imagination, but that it is very real. After all, it is a reality of today’s era that war and capitalism are closely related in all brutality, and that this development can only end badly. The terrifying specters let out one last horrified “yeah”, mouth full of banknotes. The world goes under, cynically. But still, the important thing is that it is fun to work on, says Deroubaix—who does not find that his works are without hope. His sense of humor is apparent in his explanation for why he chooses to work with watercolor and woodcuts. Watercolors are associated with Sunday painters, and horror and watercolors are an interesting contrast. And by working with woodcuts he can provoke his French countrymen, because in their mind it is the technique of the German expressionists. In fact, Deroubaix is often said to be more of a German painter, influenced among others by Otto Dix and Martin Kippenberger.

Deroubaix’ work is not just limited to paintings, drawings, and woodcuts, but also includes collages, sculptures, and installations. His wooden towers are intended as an exaggeration of the classic pedestal, and are reminiscent of oil derricks or watchtowers—representatives of power and force. Attached to them are speech bubbles with aggressive political slogans, surveillance cameras, and microphones. As an homage to the Czech photographer, Deroubaix has also created a “Tichý Tower” with homemade cameras, pictures of women, and black light bulbs as representations of the darkness after the age of Enlightenment (“Siècle des Lumières”, literally translated: “Century of Light”). 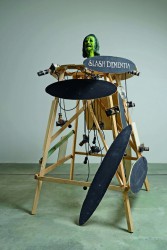