Born 1965 in Zurich, lives in New York and Vienna

For “artist of disasters” Christoph Dräger, the work Godhouse represents an at first glance unusually idyllic creation. The house in question is a small wooden church that, seen from its western side, looks like a Doghouse. A visitor expanded on this play on words by writing “In dog we trust” on the wall. All in all, it is an architectural symbiosis of a dog’s life and a life consecrated to God. “It is also a commentary on the significance some people assign to their pets,” says the artist. According to Dräger, this phenomenon is manifested among other things in the fact that people build doghouses resembling human abodes. Although it does not always reach the level of worship, the pet owner’s relationship to his dog is nevertheless anthropomorphic. Thanks to a new field of research known as Animal Studies, we can now find magazine articles on the suffering that animals experience because of this loving fallacy.

Christoph Dräger also meditates upon the status of the church, presenting the church and doghouse as a sanctimonious idyll. The church’s numerous scandals and increasing marginalization have reduced not only its significance, but also (in this case) its physical size. In the end, Godhouse is thus a model of a catastrophe after all, at a scale of 1:20. Catastrophes are Dräger’s specialty. In his works Catastrophe #1 and Catastrophe #2, he created—after two years of painstaking work—two landscapes whose trees, buildings, and cars offer a picture of destruction as caused by a hurricane. The organized chaos of Dräger’s models gives the viewer an immediate sense of destruction, among other things because of the artistic process. Was the work itself destroyed, or was it in this state of destruction from the beginning? These questions point us towards the central subject of Dräger’s other artistic efforts in the form of photographs and video—the presentation and perception of catastrophes by the media. For the viewer, the places shown in the news often exist only at the time of some disaster, and are perceived with a sense of geographic and emotional distance. Catastrophes thus inevitably turn into media spectacles. Dräger also explores this issue in Voyages Apocalyptiques, a series of photographs from formerly devastated places in a statue of renewed idyll. But another catastrophe is knocking at the door—and there is no escaping them in the works of Christopher Dräger. 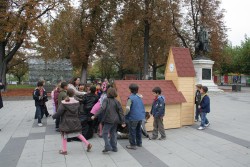 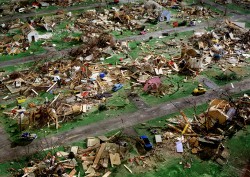