Katharina Fritsch became known overnight in 1987 when she erected a life-size lemon-yellow Madonna in a shopping area during the exhibition “Skulptur Projekte” in Münster, Germany. Made of polyester, the Madonna was a larger version of the famous Lourdes sculpture. It stood among the everyday commotion, hands clasped together for prayer, head covered in a veil, and giving the impression that she had just come from another world.

Its yellow colour gave this sacred sculpture a banal appearance worthy of the pop artist Andy Warhol. In this manner, two levels have come together in this statue: the material and the sacred. “Materiality loses itself in my work and becomes unimportant. And yet it is important, but only in that it creates the impression of insubstantiality… This is why my sculptures often have a matte finish, so that they don’t reflect the surroundings. This increases the feeling of an intangible experience,” Fritsch explains. This phenomenon was called an aura before being eliminated from modern art in the 1930s by the German cultural critic Walter Benjamin.

Indeed, since Benjamin’s time, there exists the notion that not only technically reproduced but also technically created works of art such as film, photography, and in the case of Fritsch, sculptures can free themselves from this aura and become generally accessible secularized objects that do not require a contemplative approach. However, this is exactly the notion that Fritsch wants to work against. “Although we live in a post-religious era and artists are not priests, this does not mean that we should give up concentration, powerful images and objects of aura. We artists have the task of concentrating experiences, not letting everything just randomly flow around us, but contemplatively focusing on things. This is what we have inherited from religion”.

Her colourful reproductions, such as the statues of St Katherine, St George, or such banal motifs as rats, snakes or a giant elephant that she sometimes also presents in miniature form as ordinary merchandise on shelves, oscillate between an aura that indicates what transcends material, and is therefore invisible, and the banality of simple visibility. Or as the influential art theoretician Thierry de Duve explains: today we see that the invisible still exists “and that no mediation exists between the visible and the invisible”. It is precisely this impossible mediation that her works point out – sometimes in a sophisticated manner on large prints of banal motifs taken from the artist’s postcards. 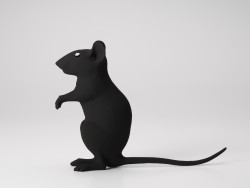