Born 1926 in Heinebach, lives in Hamburg and Berlin

The woman gazing at the viewer, only half covered by a mink, is seated upright in front of a neutral background shaped only by light and shadow. The restrained illumination in the black-and-white photograph Christa in Saga Mink (1971) modulates both the subtle folds of the fur as well as the form and surface of the body: the curves of the breast, the line of the collarbone, the fine facial features. In the picture, body and fashion article are brought together as equals and enter into an aesthetic dialogue. “My fashion pictures are […] a synthesis of the picture of the woman, the clothing, and the background,” says F. C. Gundlach in describing his photographs’ look and feel. Gundlach has been photographing women throughout the changing fashions from the 1950s to the ’80s, and has helped to shape them through numerous publications in illustrated magazines. As a young boy—inspired by autographed postcards of the movie stars of the Third Reich—he began by making portraits of his mother, dramatically lit and gazing into the camera. After completing his education, this psychological form of representation continued in his portraits, such as those of actors Dieter Borsche and Hildegard Knef, made as a freelance photographer for illustrated magazine articles on theater and film. After starting to work for the demanding women’s magazine Film und Frau in 1953, fashion became his main area of activity. “Fashion photographs,” says Gundlach, “are always interpretations and stagings. They reflect and visualize today’s Zeitgeist and anticipate tomorrow’s. They offer a projection surface for identification, dreams, wishes, and desires.” As much as Gundlach keeps his audience’s sensibilities in mind, he provides room for his model’s emotions. His pictures of women are thus not superficial or forced, but offer a portrait of women in a fashion environment. By making use of artistic tendencies such as Op Art and Pop Art, Gundlach embraces the interrelationship between fashion and art. His works have long been the exhibited and collected in artistic circles. In addition to having worked as a gallerist and curator, Gundlach is a co-founder of the House of Photography at Hamburg’s Deichtorhallen, which holds his photographic collection on permanent loan. 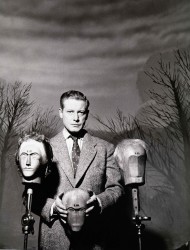 Dieter Borsche during filming of the movie “The Alfred Nobel Story” 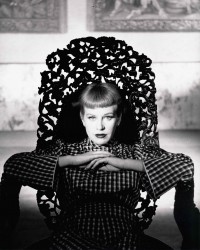 Hildegard Knef during filming of the movie “Unnatural” 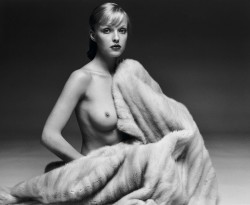