Awkwardness is Lieshout’s subject matter. Causing awkward situations, talking about things that people would rather not talk about, analysing relationships that are painful, or provoking a Chinese girl to pronounce the word feminism—these are all issues taken up in his films, and Lieshout brings all of these into the exhibition hall. And if it is awkward for audiences to watch these films in the sheltered space of a museum, then how did the actors of these films feel, most of whom are Lieshout’s relatives, as well as friends, foreigners, homosexuals, racists, drug addicts, the handicapped, and all sorts of insane people. What happens in front of the camera is not always politically correct, but then this is what it is all about: without embarrassment or inhibitions, to throw oneself into the stream of life. To lose control, as the author himself explains, to overcome fear, and people need more and more to feel they have everything under control—in fact, Lieshout himself apparently struggles with this. However, let’s be perfectly clear: these films are not in any way authentic documentaries that just effortlessly take form. They are sophisticated, elaborately edited constructs, existing somewhere between narrative and testimony, between staged moments and real life.

Lieshout, coming out of the hip-hop scene of the socially problematic districts of Dutch cities, first turns his attention at the beginning of his career to the issue of one’s own identity. And what is he starting with? Using a Freudian model, he almost naively starts analysing his relationship to a dominant mother. His film Up from 2005 oscillates between feelings of affection, hatred, fear and reluctance. There are no taboos, even his talks with a psychoanalyst. The film Sex is Sentimental was made in 2009. Lieshout falls in love with his assistant, and this passion all of the sudden comes into conflict with his passion for art. Lieshout resolves the conflict, how else, than by making this the theme of another awkward film.

This activist takes on the issue of consumerism in a less awkward but more ridiculous manner. He attracts customers to his own online shop with the label “buy none / get none —Free”. His slogan is “Real Luxury is Buying Nothing”. Lieshout accompanies his films at exhibitions with wild drawings or scribbling, pornographic collages, and graphically altered inscriptions, and despite all of the awkwardness, it is difficult to deny a certain stirring intensity. 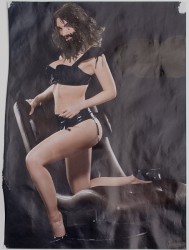 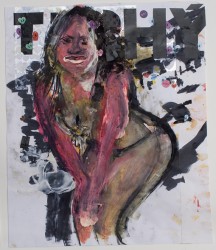 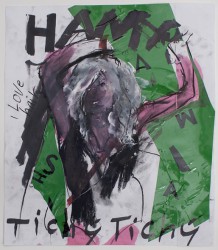