Since the 1970s, Urs Lüthi has documented himself using photography. He also experiments with what the American philosopher Judith Butler defined several years later in 1990 in her book Gender Trouble as “performative identity”, which every individual can own at anytime and anywhere as opposed to ontological identity. Thanks to mass global media, such as television, the press, and the Internet, we are confronted today more than ever before with the most diverse roles determined by social status, gender, class, culture, and religion. Therefore, people more often take on specific roles. According to Judith Butler, our original ontological identity is weakening today and is being replaced more and more by our performative identity.

One of those identities is sexually determined: it is the role of being a man or a woman. In the 1970s, Lüthi as a thin young man dressed up as a woman and posed in front of a camera. The series Androgyny deals with the boundaries between male and female behaviour. Although the photographs appear seductive, they also uncover the clichés connected with the roles of men and women. However, potential is hidden in such performances, which is also emphasized by Butler in her book. With performative shifts—a man acting as a woman—absurd situations occur, the nature of which is to ridicule and thus undermine the status quo. For this reason Butler ascribes critical potential to a farcical approach, not only in art but also in society.

In 2001, when Lüthi represented Switzerland at the Venice Biennale, this performer commented with his performances on the notions of a better, healthier, more successful life, just like in advertisements that we see everywhere. An elderly man in sport shoes—the artist himself—dressed in informal black shorts and a T-shirt, but with an unathletic bulging stomach, holds in one hand a blooming rose and in the other a black plastic trash bag. Or he is posing on a white pedestal like Venus, and his age-worn face under the caption “Art is the better Life” attempts to make a happy expression—but in vain. And suddenly in front of the audience, all of the absurd emptiness appears, which is itself such an aesthetic cliché used in advertisements. “I record the sins of this world, the aesthetic ones. And then I go home and make something nice out of it. So that we won’t suffer so much from it,” Lüthi explains. 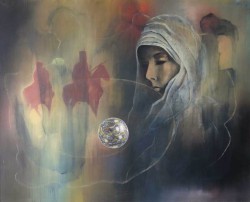 Self-Portrait (from the Great Adventure) 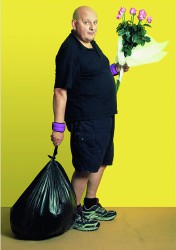 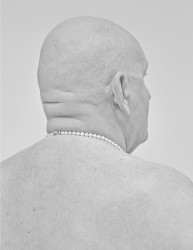 The Remains of Clarity (Pearls)